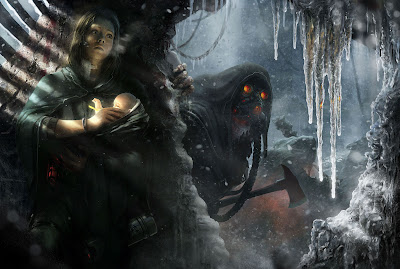 Senea is the name of the setting that I'm going to use for The Odds Are Against You.

Imagine, if you would, an independent space colony, thousands of years old, on a wrecked world. The days are short, the sun is weak and ineffective, and what little civilization remains is due to a small, bizarre implant that harvests the mental energy of its wearer and converts it to usable power.

The remaining population (several million, a far cry from the nearly billion that once existed) either accept the laws of the Lord Ancestor and live in a guarded settlement underground, or attempt to eke out an existence amongst or alongside the half-feral Surfacers.

Underground's not a bad place to live- it's slightly warmer, and there are a few manufactories working on reclaiming scrap from the surface ruins and converting it into life's necessities- weaponry, walls, tools, and the ever-necessary lifesuits that every Caver wears on the surface. Their lives are longer, if not slightly more cramped and controlled, and there's even a burgeoning middle class. Mercenaries are the most common link to the outside world for most citizens, and that's fine by them- Surfacer raids are not uncommon and that's more than enough of a sight for most Cavers.

Living aboveground is for the hardy, insane, or ambitious. Outside of the watchful eye of the Lord Ancestor, tyrannical autocrat for underground society, Surfacers are actually free. Armed with a combination of salvaged Ancient gear from the times of the meteor strike cataclysm or even the age of the Progenitus, and barbarically crude zip-guns, hand weapons, and explosives, Surfacers frequently loot the surface world's ruins, the Caver outposts, and each other for what they need.


I dunno, I know my writing needs work (what else is new), but I think it could work. As a matter of fact, I think it will work.

No, this doesn't conflict with what I posted yesterday, it's an expansion of the same idea.
By Nick - January 24, 2012