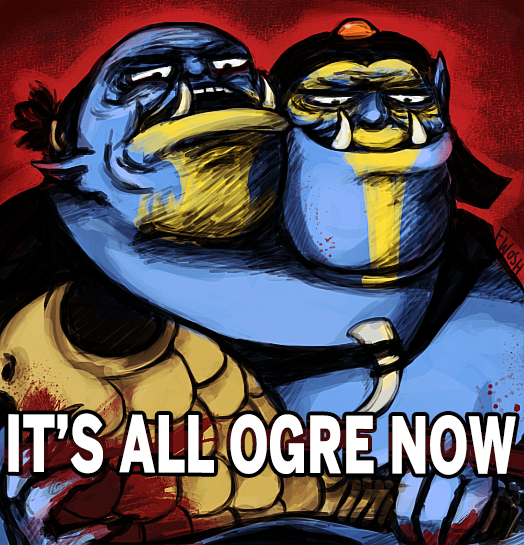 I've been busy with real-world stuff recently, but there's always time for FantasyCraft.

Today I actually managed to surprise myself with my efficiency in preparations. Check this timeline out:

Last Sunday- Game's over. Time to think about next session. I ran that session by the seat of my pants and my players ended up uncovering a demon cult in the center of town. Now I need to figure out what the underside of the dungeon looks like.

Monday- No motivation to prepare, so I don't. What's the rush?

Tuesday- Same. No preparations done yet. I'll get to it tomorrow, I don't have any ideas. It's barely even the beginning of the week anyways.

Wednesday- I get through five minutes of prep, then a friend calls. I talk for a while, then go to get back to work. I feel the urge to delete everything I've written [1], so I decide to call it an early night.

Thursday- I don't even remember, honestly. Might have had a couple of drinks? I know I was re-watching The Office because I am still doing that.

Friday- Preparing for somebody else's game. I'll write more about that later.

Saturday- I'm running out of time here but the power goes out and stays out for a couple of hours. I use the Aspects system from Fate to draw some connections. This becomes boring so I write a letter to my wife that ends up being 10 pages. The power's still out, so I get bored. I begin drinking. The power's on, now, but I'm too tipsy to write anything interesting, so I play video games and continue drinking until almost midnight. [2]

Sunday- I wake up at 730. I lay in bed for another hour; I'd had too much to drink, so I dreamt I was escaping a horde of demons (or something) by smashing my way through walls with a hammer. In addition, my head hurts. The game's not until 9, so I lay around until about 830. I realize that I haven't prepared anything, and I haven't eaten. I grab a granola bar and sketch out the underside of the temple [3], then the surface. I jot down some monsters I'd like to use, just the names. I grab a basic demon stat block from the FantasyCraft book and modify them. This one's faster and smaller. This one's got a grabbing bite. This one spews acid. Now I've got 7 areas, five unique monsters, and a plan for the next couple of sessions. I make some coffee and am ready for the game.

Moral of the Story: A half an hour of prep a week is more than enough to carry you through a session, if you focus on what you know you'll need.

The Secret: The entire world is painted in broad brushstrokes, and then I iterate. By this I mean I drill down on an aspect of a thing until there's enough detail in it, and then I go broad again.

[1] This happens literally all of the time and is responsible for me not writing here as much as I used to. Inevitably, if I write enough of anything, I will grow to despise it and the best way to make sure that it survives another day is to completely change tracks.

[2] I realize, in retrospect, that I probably should have gotten a good nights' sleep. My players deserve a better game than I can provide when I'm tired and slightly hung-over, but you know what, I did an OK job anyways.

[3] The temple snatches people and animates their corpses as demonhosts, kind of like how it works in that 40k book about Gregor Eisenhorn. I really like that book, for the most part. Some of it is kind of dumb but as a whole, I'd recommend it to anybody who likes a fairly serious 40k tone that isn't grimdorky.
By Nick - March 29, 2015 No comments:

Maid RPG, of all things

You read that title right.

I successfully hosted a game of Maid: the RPG last Sunday. It was a strange and terrible thing.

Let me start by saying that I am not an otaku, or a weaboo, and I don't understand much about this strange anime-worshipping culture. I really don't. I don't see the appeal in discussing waifus or pillows emblazoned with anime girls or the obsession with pop music specifically from Korea or the prestige in watching cartoons specifically from one country of origin or the entertainment to be derived from arguing about one type of cartoon to the next.

I like Dragon Ball Z and Spirited Away and Samurai Champloo; I also like Aladdin and Wall-E and The Hobbit [1]. I like a lot of things. I don't see the need to obsessively devote yourself to one facet of entertainment; then again, I've squabbled over roleplaying systems for years now, so what do I know?

Instead of the Master, there was the High Priest- a 50ish year old sorcerer-priest.
Instead of the Mansion, they stood on holy ground; the great Temple and its Heart, always to be kept clean and in working order.
Instead of a maid uniform, they wore temple garb; robes, shoes, a hat, and a symbol of priesthood.

It worked pretty well, actually. The game itself is about attempting to flawlessly serve your master and be the "best maid" by accumulating the most favor, so it could ostensibly work for a number of settings; small military units, or pirate ships, or a necromancers' servants, or bureaucratic office drones or even standard adventuring parties, where the Party Leader is the master and the Mansion is the Dungeon and instead of keeping it clean they need to kill all the monsters and take all the loot.

The party dealt with:

1) Waking up late and a grumpy High Priest
2) Messing up the first attempt at a meal
3) A young temple attendant eating most of the food
4) A troublesome young lady who insisted on seeing the High Priest (who did not want to see her)
5) A surprise torture chamber discovery
6) One of the attendants (same one) playing with the implements and nearly getting a visitor hurt
7) Running out of bread and having to travel to the town to get food for the visitors before the High Priest finished his invocation
8) An irritating imp, who had to be abjured away
9) A dinner that was spilled on the ground and a small cake that was ruined

It was an eventful couple of hours! The rules are nice and simple and the action flowed, largely due to the way stress and abilities interact; every roll is 1d6 x your attribute and if you lose a conflict you take stress equal to their roll result divided by your attribute, so it really stacks up pretty quick and when you suffer your Stress Explosion (by getting more than your Will x 10 in stress), then for that many real-life minutes your maid must constantly be acting up. Some of them will become violent, some of them will race, some will go shopping... the list is tailored towards some sort of anime emulation but with a little inventiveness you can tailor the experience a bit more. I should have done that, now that I think about it.

So even though I know nothing about whatever sort of fiction it's supposed to be emulating, Maid RPG is a pretty tight little system, even if it is absolutely horribly written. [2] I'd play it again, but one of my regular players really wants to get back into Fantasy Craft, so we'll just dive back into Maid another time and see what happens at the end of the day!

[1] This one, please. Not that overblown ode to mediocrity that Peter Jackson produced.

[2] The "fluff" that takes up most of the pages is written by what I imagine to be some sort of 13 year old girl on a sugar rush from too much Pocky, one eye on Gaia Online and the other on Naruto. It's some of the worst published writing I've seen in my entire life and its purpose is a mystery to me. Nowhere in the lengthy fluff does it provide any useful examples of the matter at hand (which is simple enough not to need an example)- rather, it seems to be one long "session report" except that it is very clearly written by one person pretending to be multiple people. Did I mention it takes up more room than the rules do yet? Because it does. If you buy Maid RPG you are buying 1/3 fluff by volume, with the remaining 2/3s being largely random tables. If you cut out the tables and the fluff you are left with a one page RPG system.
By Nick - March 04, 2015 No comments: