Snare of the Spider Kings 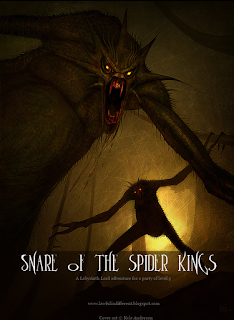 I've always had a thing for Ettercaps, and not entirely because they were one of the few interesting monsters in the first monster manual I ever had access to. (The AD&D quick play introduction set, if I remember correctly, featuring Thaddeus the Wizard among others) There was something interesting about these lumpy, gangly, spider lovers that set off little ringing bells in the back of my head. Things like: Are they intelligent? What's up with the spiders? Have they created tools they can use in their two fingers? Are they venomous? What do they taste like?

Basic questions, really, but there they are. I wish more adventures would use Ettercaps. I'd write one myself, but the only way I'm writing one is if I write it for Microlite 74, and I know people around here don't play that game anyways. I think I'm about the only one who even likes it, some days.

Having a hard time figuring out where to take Rodiel, specifically what to do with the bard class. I have a feeling that it's going to be sticking point in my design.

Then again, there doesn't need to be a Will-oriented class, nor a specific singing styled class. Instead, I can dismantle what I have from bards, incorporate it into a different class, and then let Will be the generic "everybody should probably be good at this" sort of deal.

Alternately, I can move Will to Slayers (the red-handed berserkers sort of dudes), and then let the Toughness stat be the classless attribute, claiming that everybody should be as Tough as they can stand, since they're supposed to be heroes anyways. Which kind of makes sense.

And after all, bards can have any sort of fighting style. Sorry, but if you had your heart set on being a singing troubadour in the lands of Rodiel, you're either going to have to get lucky with the randomization or decide that your Sentinel has a taste for showtunes.

Other than that, though, the really hard part is deciding on basic game mechanics. I've got the ideas in my head, and I might end up ripping of D&D's mechanics and then making them my own sort of thing. The way I've got them working in the very vague prototype is a lot like Mazes and Minotaurs- you have four stats, and you roll under them every now and again when you have to. I'm trying to keep the system simple, because the best games are the ones that have a very tight focus and have rules that you can explain to somebody in ten minutes and then keep remembering them as you consume more and more alcohol or, for your abstainers, as the night grows longer and longer and everybody's about ready for bed.

Hopefully it pays off. Our hobby can never have enough system-light games about adventure!
By Nick - April 07, 2012 No comments:

Email ThisBlogThis!Share to TwitterShare to FacebookShare to Pinterest
Labels: Rodiel 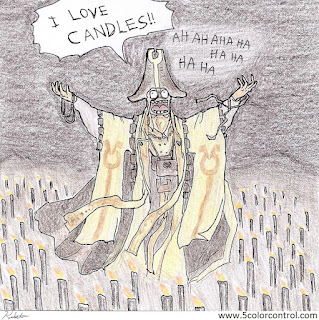 Email ThisBlogThis!Share to TwitterShare to FacebookShare to Pinterest
Labels: funny

And now, time for something a little different

I love this guy's Old Spice commercials. People want to talk about that smooth guy on the horse with the diamonds, but I like the raw insanity of Terry Crews.The first time I saw them on TV, I thought I had gone insane. You never get to see anything genuinely new, but here he was, screaming about how Old Spice can turn off the sun.