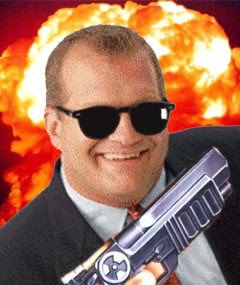 I haven't written in a small age so here's what I've been up to:

The party, with the help of the guides Madtwig (the young Rootwalker) and Tehlmar (the exiled elf drunk) finally come across the great elf holding of the wizard Ecgredd, who they find living inside of an enormous living tree set inside a dome formed of intertwined tree branches. The other elves live in earth houses, wooden huts and other less permanent settlements, and mill about inside the dome. They tend gardens, leave to hunt, converse amongst themselves, distill alcohol, improve their buildings, and otherwise occupy themselves to their pleasure. It is peaceful and calm and quiet here.

The first elf they meet is named Osbald. He has long hair and a thick salt and pepper beard, and he is unfriendly but not unhelpful. They ask him where Ecgredd is, and he answers, but warns them that he is not taking guests. They ask who to talk to in the meantime and he answers with names: Goldwin and Unlaf. They ask where these elves are and he laughs, asking "Am I his keeper?"

But they find more help from Plegmund, another elf who invites them into his hut and offers them a distilled drink of his own make. He airs his grievances and asks for the players to help. The crux of the issue is that Ecgredd is trusted by the elves for leadership, which he has been shirking. His subordinates have been keeping things running along somewhat smoothly but things have been getting worse. There's a conquerer starting wars and goblin invasions and people being sold into slavery and druid troubles and without anybody that's trusted enough, the elves have not been able to work together long enough, since "If there was trouble, Ecgredd would let us know about it." The elves have become complacent and Plegmund and others have started to become worried. It's been almost a hundred years since anybody's heard anything substantial from him!

The party hears the following rumors: Merehwit, who lives out by the lake near the druid's lands, is tormented by assassins and believes his friend has already been slain by Badanoth, who is a friend of Ecgredd. Egric believes Ecgredd has been possessed by a demon and the demon must be expelled- but he's also visibly unhinged. Plegmund's wife and child have been slain by the conquering elf Heardred and he has been ignoring his students. Saewig's wife has been captured during a goblin raid and despite promises by Ecgredd, no actions have been taken and no divinations read.

They decide that goblin-slaying could be a fun pastime and besides, even if they don't find her, those goblins are a problem anyways so they'll be taking care of two obstacles in one go. They ask for directions and set off, leaving their cart full of loot with Tehlmar, who's been catching up with old friends and making new ones.

It's only a couple of days of travel before they leave the heart of the Grey Forest and enter rough, broken hills where Red spies a solid tent circled by four wooden towers. They're crewed by goblins! So they party begins their preparations. Using the cover of night, they wait until dawn, where they then charge into the middle of the camp and begin destroying everything that moves and a couple of things that don't. It's a mixed fight for them; on one hand, there are six or so goblin spearmen with chainmail, shields, and throwing spears. They're tough as nails and work together in phalanxes and wedges to give each other partial cover. Even though they don't do huge amounts of damage (and Luke has a high Defense anyways) they do manage to do a bit of damage to him and either negate or avoid most of the damage that he deals out.

On the other hand, despite being in tall towers, the crossbowmen are mostly ineffective. Their crossbows take a couple of turns to reload and only do 1d4 damage. They negate 5 points of armor and have bleeding, but 1-4 damage every two to three turns isn't enough. In the future they'll either be more formidable in melee combat or have secondary weapons available, relegating crossbows to armor-piercing duty only. I'm thinking black powder bombs, or perhaps slings. Or maybe both, so they can toss the bombs with the slings and when those run out, they still have plenty of stones to hurl.

There was a goblin mage-commander but he didn't get to do much, since the thief jetted over to him as soon as they realized he was casting spells. He got out a single fire elemental before being punched into a bloody pulp, and then the fire elemental was killed the next round by Vince, who mangled it with a sword and took a miniscule 1 fire damage. Next time I'll have the mage either somewhere hidden or behind a larger mass of opponents. It's difficult to prevent movement in this game, or to prevent actions. On one hand that's neat because it means you can cast fireballs at people's faces, but on the other hand it means that to prevent somebody from moving you have to either form a mesh or try and hope nobody notices you. Taunting works as well, since they either attack the taunter or grant them a small bonus to attack, but it's often not enough for anybody to care.

Either way, they killed all the goblins (and chopped one tower's supports with a bastard sword) and looted everything in the hut (which ended up being a decent haul in and of itself) only to discover a doorway leading into the hill! What strange and frightening mysteries lurk behind this door? Will they find the elf captive or more tenacious goblins? We'll find out together on Sunday!
By Nick - December 11, 2014 No comments: