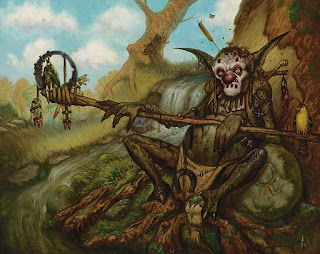 Welp, I've got some good news and some bad news. Which do you want to hear first?

Who am I even talking to?

As it turns out, porting the HeroQuest rules took me a little under one page, as long as we're talking about the stuff that you just need to play: how to move this guy, how to move that guy, what spells do, you know, the basics. The sort of thing that's covered in the "basic rules" section of the thing. It was easy. The spells are on self-explaining cards and so are the weapons and armor and potions and stuff, so that's even less to go on the actual "rules" page. I'll probably make this into a multiple-page PDF instead of a strictly one-page project (because I'm having so much fun, this is a trip down memory lane), which includes the need to find a great, iconic image or some sort of graphics wizard to whip one up for me. It's almost done. It's so close, you could run something right now (like, right now right now), but I'm going to wait to do the items and the magic for a little later. Because that's how I roll.

That was supposed to be the good news, but it ended up also being the bad news. In case that wasn't enough bad news for you, here's some more: It's gonna take longer than a day. But that's good news if you didn't know that I was on such a tight self-imposed schedule.

The more you know!

If you've got any suggestions to HeroQuest, let me know here. I'll also be scouring some of the HeroQuest messageboards and seeing what people come up with. I'm probably going to avoid most of it, embrace some of it, and marvel at the insanity of some people for a very tiny amount of the cases.

Anyways, I've been up for almost 18 hours now and it's probably getting close to nappy time. I'll probably see how much work I can continue dredging out of this brain of mine before I call it a night. Probably, I can at least write the cards into a text form, or find a copy of Zargon's screen and transform it into text-only before the night is up.