Alright, look. This was a game that I wasn't excited for in the least. The writer's a fairly untalented stock fantasy writer, the artist is apparently Todd McFarlane, two people for whom I have little love. The lead designer is the guy who apparently also designed Morrowind and Oblivion, and the worst edition of Paranoia (2nd, sorry guys). And since they marketed it so heavily promoting those guys, I just said, "I'll pass."

Well today I'm giving it a shot, and holy crap does it want me to dislike it.

Look, I'm not an easy guy to impress, I get that. But look at this shit. 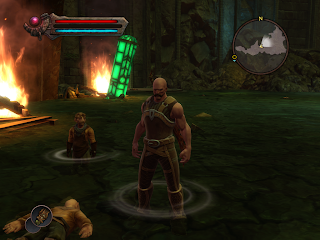 That's not me showing off the game's graphics (pretty, but weirdly slick and weightless), that's just me turning the camera around so you can see my character's face. He takes up most of the screen, and when I turn it around to get to actually playing, for some reason the camera is centered on the feet. 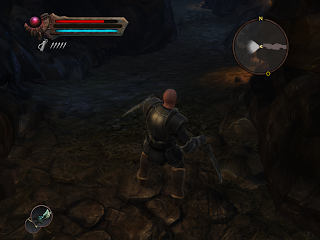 See what I mean? I'm not exaggerating- my character takes up a sincerely grotesque amount of my screen. It's weird.

The combat is floaty and it feels like I'm swinging around cardboard. No sense of impact or weight or damage, but if it cranks up later in the game that's fine. I'm willing to give this one a sec.

Destructable crates are passe but make their presence here. Bows and ranged attacks auto-aim and seem to be massively superior to actually hitting things with fists, which is also fine, if a little strange. There's rudimentary stealth, wherein you enter stealth mode and creep around for a while. If you get close to somebody you get to do a very unintentionally silly auto-kill stab thing, which is whatever.

The motion blur is driving me crazy, and my character wants to leap and bound about when I so much as tap A or D, which is really, really annoying. He won't just walk, it's like everything has to be bigger and bolder because LOOK how pretty I am, the game's saying.

I don't think this'll be one that I keep playing on and on, but we'll see. It feels like somebody looked at Fable 1, went "Yes, that's perfect" and then content themselves with just making it prettier instead of actually adding anything cool to the game. But Fable's a rather light-hearted jaunt through a big and pretty world, and I don't know if Amalur has the same spark that Fable had. I guess I'll find out. 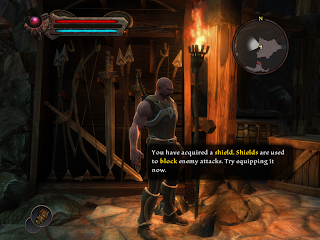 One parting note: Is it too much to have your weapon racks actually display the kind of shit that's on them? I want to take the sword and the spear and the bows, not just the single shield and then go "durrrr guess that's it." That's not it, you idiot, take the spear, too, and leave your rusty fucking longsword behind. And HOLY SHIT, why do I have to use the Escape menu to change my equipment? Diablo didn't have you do that. Dungeon Siege didn't either. Fable did, but it was goddamn annoying there, too. Don't make me have to change screens to put on armor, people.

Also: Your shield appears on your arm when you use it, and you put your weapon on your back while blocking for some reason. Did I mention that the camera angles are shit? Sometimes it runs away from me, and I find myself obscured underneath the minimap while the camera helpfully displays a completely inert patch of ground.

And please, why are there roaring spiders? This spider just popped out of the ground, stood there and sorta squeak-roared at me. Spiders don't have vocal chords, and I'm reasonably sure animals aren't interested in trying to intimidate me. It's like the worst monster cliche. Why does every monster stand and roar while I get to watch the cinematic camera pan around it for a sec? IT'S A FUCKING SPIDER, WHO CARES?

This just happened: I killed a troll, and did a quick time event where I SPEARED IT IN THE EYE WITH A LIGHTNING SPEAR THING that apparently I can summon now? But obviously only after I've killed a troll, because otherwise I just have to shoot regular magic or else summon fire out of this staff I got from a chest. Who keeps putting their unlocked chests out where people can see them? Who knows, no time to ask questions, adventurer, you've got to finish the tutorial level!

I feel like writing about this game, because I played it and it's the sort of game that warrants a review.

Not because it's particularly good, mind you. The impression I got from Antichamber is one of overwhelming mediocrity, and if you want to find out why, I will tell you exactly why.

I'm not reading this synopsis: Solid 6/10; neat style and some clever puzzles, but ultimately collapses in on itself as unintentional self-parody combined with mostly uninteresting puzzles.Would recommend to people who've already played all the better games in its genre and are looking for something new, but nearly nobody else. 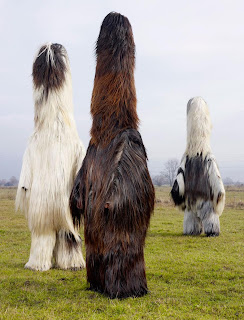 This is a thing actual intelligent adults participate in. If you were Bulgarian, you probably have heard about this sort of thing, but I'm posting it here to illustrate that, once again, real life is stranger than fiction.

What Is Going On 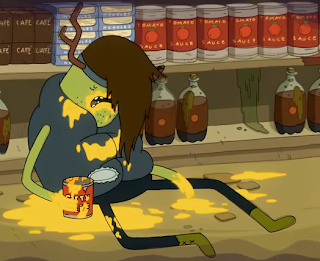 I have been gorging myself on Victoria 2. I actually stayed up till like midnight playing the damn thing- I couldn't help it. It's compelling.

It's all about managing your people, unlike most map-painting Grand Strategy games. You have to make sure that your ethnic factions are all working together in harmony, and you can capably quash rebellions, and build factories, and you know, honestly, just look at the game if you like the time period. It's set from the Industrial Revolution to the Great War and it's wonderful.

I was playing as the Russian Empire and it's a huge pain to get my illiterate masses of peasants educated and getting them to actually be capable of industrializing because hooooly crap, there are so many of them. It's insane. I can raise something like three times as many armies as anybody that isn't Britain or maybe France, but I don't have any industrialization so I can't be a truly great Great Power. It's frustrating!

But I guess what can you do. 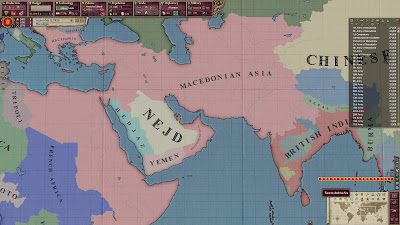 This isn't my empire, but this is the sort of thing you can do in the game.

For example: Imperial Russia (me) has claimed Florida and part of Japan in my game. It's beautiful. 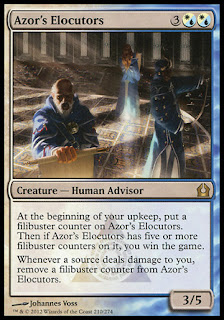 There oughta be a card game where the only win conditions are written on the cards. Like this guy here; the game should revolve around what you want it to revolve around.

If you were running Azor's Elocutors, for example, you'd be all about protecting these guys. It'd pretty much be your main mission to guard them with everything you have, packing plenty of counter spells and weaving lots of charms over them to make sure that your enemies didn't get the chance to do anything to interrupt your win condition.

But what if they're running something like Hellkite Tyrant? 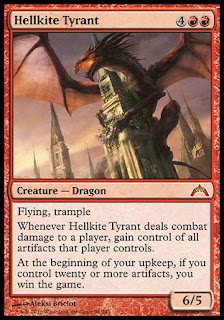 Now you see where I'm going with this.

I'm thinking there'd have to be a couple of card types; and there'd have to be a lot more interaction between card removal and prevention of removal, and then some rules on how creatures interact (because in Magic, for example, you can't directly attack a creature), but I think it'd be interesting. Maybe not as long-lived as Magic the Gathering, but it's entirely possible that it'd be a decent shared deck game, or as a customizeable "Living Card Game" type thing.