These guys are birdmen from a cold climate. Although the climate is barren, the birdmen have learned a lot of magic to manage the place. They have developed the use of magical ice equipment, which unfortunately weakens in warmer climates. This magical ice weakens in warmer climates. They will lance the heck out of things, and also like archery. Their culture highly prizes literacy and religiosity. They're sort of elitists, and they believe that their god is the best but that only birdmen are good enough to follow him, because he demands the best and challenges you all the time.

These Aarakocra form a proud and arrogant society based on literacy and, somewhat bizarrely, snow. Your typical Aarakocra is a member of a temple, the organization that dominates his life. Temple life is harsh and difficult. The only materials available are stone and snow, and so they build simple spires on which to roost. The temple, on the other hand, is dedicated to a local god, who can grow in strength as the Aarakocra help the god's multitude of needs. Gods have their own powers, as immortal and immutable beings, but require sustenance in this world. A god is sustained by a good, clean temple and supported by righteous acts. They are often off doing their own thing somewhere else, and only rarely return home. But the Aarakocra sacrifice their own food for the hope that even the smell might help in its own way, as little as it might be. 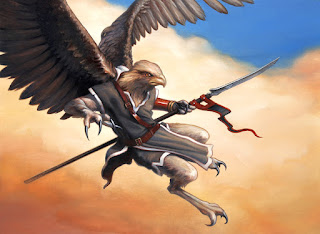 The Aarakocra are hopelessly devoted to their gods and to the ultimate goal: to cover the world in its sacred frost. The world was once cold and delightful. Food was plentiful then, and the skies chattered with life. The Aaracokra built high spires then, and lived in harmony with the world. There was then a singular god that was obviously the best but his people failed him in a critical moment and he was slain by invading gods. The gods of heat came and started wrecking the place, turning tundras into cancerous forests and lakes into fetid and pestilent swamps.

Their strength, magical ability, and daring is what got the Aaracokra this far, and they know it. As a result, they are nearly impossible to dissuade, and are willing to use betrayal and deception at any time.

Desert Aaracokra
The Aaracokra have decided to set up a desert outpost. They're extremely uncomfortable but suprisingly pleasant. They don't need much from the locals that they happen to live by, and are amenable to most agreements as long as the Aaracokra are given enough space. They first attempt to peacefully keep a respectful boundary between the two races and then defend their territory with spear and claw. They are led by a singular mage-priest commander. 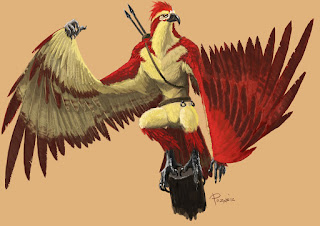 Rogue Aaracokra
Some Aaracokra have abandoned the religion of their ancestors and have resigned themselves to surviving in the fetid filth of the rest of the world. They are still strongly attached to their insular culture, and continue to define themselves in terms of the main culture which they are avoiding.

These Rogue Aaracokra have no more loyalty for those around them than they have proven to have to their gods, and often take roles as mercenaries, messengers, and smugglers for the benefit of the terrestrial creatures they associate with. 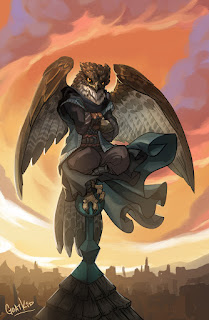