The Odds Are Against You: Dystopian Edition 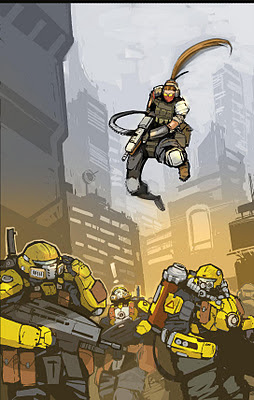 I think this is the setting I want for The Odds Are Against You.

I think that a nice near-future dystopian setting would be a lot of fun to be an action hero, especially if you happen to be the kind of guy who thinks that jumping into the middle of a group of heavily armed soldiers wearing nothing but a ponytail, some kneepads, and a sweet bandana is a good idea.

The whole gist of The Odds Are Against You, of course, is that you're the kind of guy who's a bad enough dude to get away with it. You win against this situation because you've got explicit plot armor, these guys are faceless mooks, and you've got an awesome, awesome idea of exactly how you're going to get away with it.

If you don't remember, The Odds Are Against You is the game of action roleplaying, where you're dealt a hand of cards and you play them out every time your character isn't a Bad Enough Dude to get it done automatically. It's not a bad system in my oh-so-humble opinion, although it hasn't been playtested for shit yet. I aim to change that soon. But I digress.

The point is that I've been working on it for months and I just now realized where I want to go with it. And I'm going to release it, and soon. But not now. It needs work. You see: