Low to High Fantasy: Goddamn This is Hard 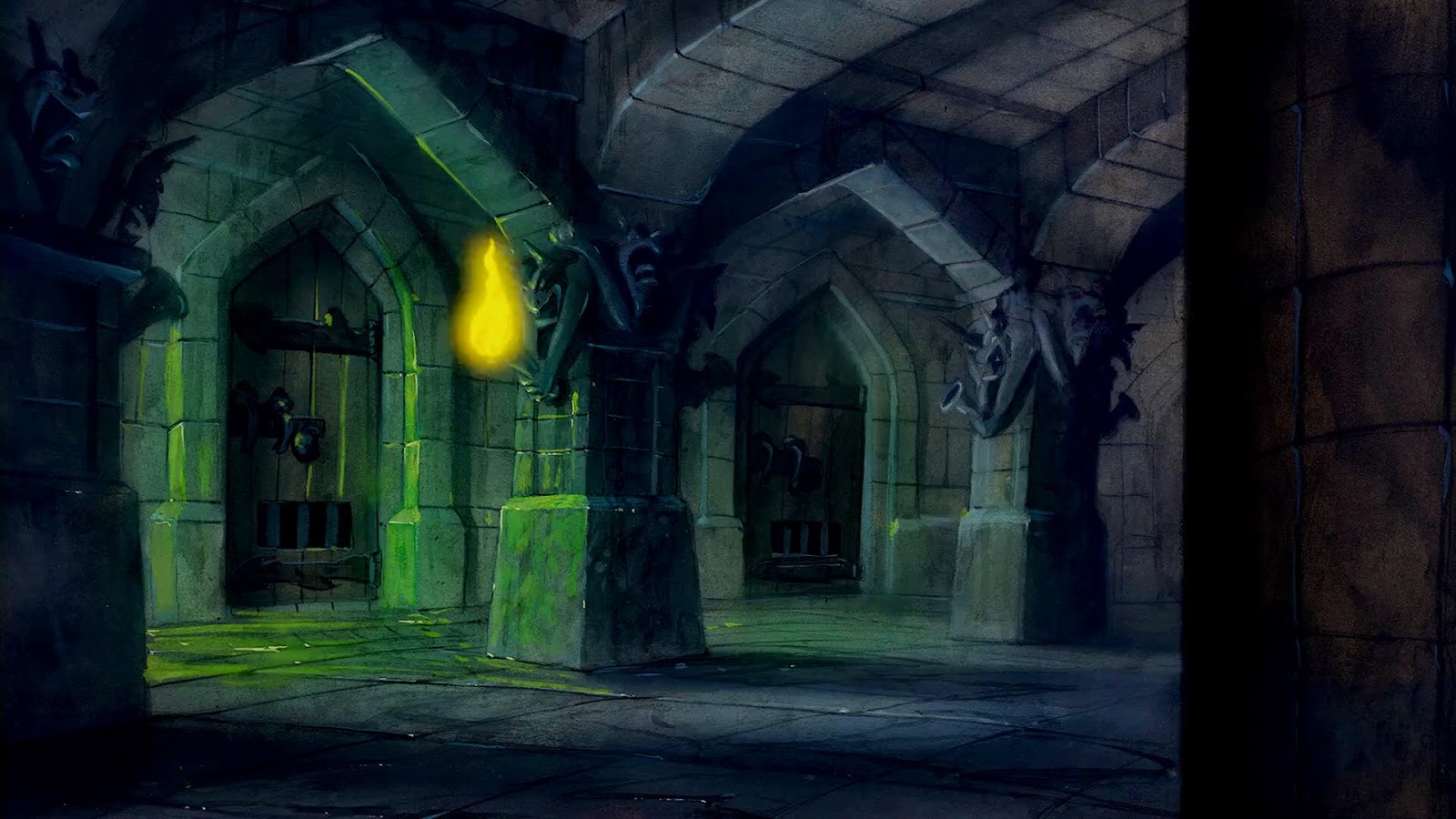 My usual campaign is generally a low fantasy affair- think Game of Thrones, Elric of Melnibone, Warhammer Fantasy, and Norse mythology smooshed into a single world. It's a world of strife and mystery, see, a world where lowly peasants fight off bands of trolls while the lords plot and scheme in their castles. Where stone-faced priests root out demon cults, and where shades of black and white play out. It's a game of unearthed mysteries, of herculean and futile struggles, and of half-glimpsed horrors in the night.

I'm doing the exact opposite of that this game.

In the Megadungeon, where Black is the deepest Black and White is a beam of light cutting through the night. Hideous and hateful monsters bellow challenges and when the heroes win, the world rejoices with them. They tell stories at inns, and people gather to cheer them on and wish well. The monsters, once defeated, band together in darker corners, cowed, and the shining heroes go forth once again. The ugly monsters are naturally horrible and easily manipulated by a greater evil, which is why they need to killed. There's no rehabilitation, because their minds are too corrupted by shadow. So go in there and clean the place up! We're in danger here!

It's a massive transition, and I'm not sure that I'm doing it right. It's second nature to have corrupted villains and shadowy plots to work with an enemy of an enemy but you know what? I'm trying to listen to some power metal to get my brain in the right place, and I'm going to try and read some Good vs Evil high fantasy stories to do better. One of my players said he'd like to be able to kill monsters and loot things without feeling bad about it. I can do better than that. I want the party to say "Fuck yeah, we stopped the Goblin Horde from burning Rakelia to the ground!"

But first I need more. If anybody has any suggestions of really good high fantasy novels, or power metal (or any similarly upbeat music) they want to throw my way, please do so. I need inspiration to make this game larger than life. 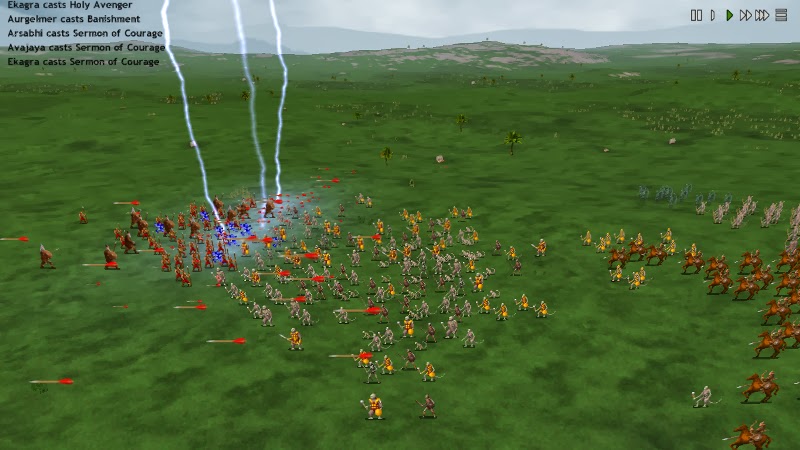 I've been playing and plotting about Dominions 4 instead of spending more time with roleplaying games or being part of some sort of nebulous roleplaying community. I feel no regrets- Dominions 4 is a massive, beautiful game with insane complexity and depth. If it's possible to get to the very bottom of the strategic options in this game I'd be surprised, considering that it takes multiple games against other players to begin to understand the basics of the game, and there probably isn't a person alive who could conceivably be considered a master.

That's really all I have to say, for now.

I've been working on a very, very basic analytical guide to one of the nations- Middle Ages T'ien Chi, a nation based strongly off of feudal China and with some very interesting and fun mechanics. I made it for myself for a seemingly stalled multiplayer game I'd been playing among friends, but we'll see where it ends up.

RATING: THREE SKULLS OUT OF FIVE


Last Sunday I got to actually play Dungeon World again and even though we only played with three players (and one of them was text-only), it was still a blast. Running Dungeon World is like leaning your head back into a cold waterfall; refreshing, bracing, and very, very messy.

As usual, we only got through one level. I'll double back and do the other levels later- this one was codenamed Level Fortress originally, but I decided to play off an offhand suggestion by one of my players:

He was goofing around in Roll20 with a box he'd made (you can doodle on the virtual whiteboard) and kind of stuck it next to one of his characters. I asked him what he was doing, and he said "I was bored at the end of the last session so I drew a box and was messing with it." *

"So what's in the box, then," I ask him. This is one of my favorite ways to play with other people- turn the question back on them! Let them create! Sometimes their idea is boring or uninteresting (sorry guys) but most of them time it'll at least be something you didn't think of, and will help you understand how they're viewing the imaginary world you're sharing.

He says it's a skull, and I say "that's absolutely true and oh shit you dropped it, it's falling down the stairs!" I'm not sure what compelled him to want to chase the skull down the stairs (maybe he just wanted to hang on to the skull- in Dungeon World, since your damage mostly depends on your class instead of your gear, it'd let him at least fling it at somebody if he wanted to, or maybe he thought it'd be a nice keepsake) or maybe he's saving it for a monologue? 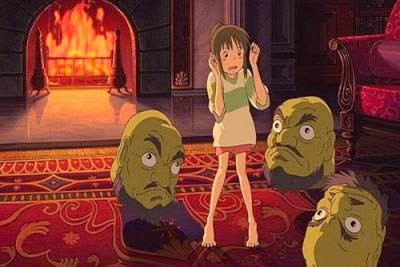 Anyways, so he's chasing a rolling skull down the dungeon stairs, and now it's "getting away." I watched Spirited Away yesterday and, if you've never seen it, there are these weird green rolling heads that the bath-house witch keeps around and so in it went. The skull really is getting away, guys, it's going down the passage and you'll never catch it if you don't hurry up!

In that room was a box with some snakes, which they played with briefly, and then continued on. I can't remember what, if anything, inspired the idea of the Musical Skeleton Amigos ** but their first enemy encounter on that particular level was three spooky scary musical skeletons. One had a rattling maracas skull, one was playing its chest like a xylophone, and the last one was playing its head like a drum. They enjoyed that, although the skeletons didn't last very long. The paladin almost got his face eaten off (skeleton makeout session) and they got pretty banged up in general. Their armor took most of the suffering, I think, and they headed off after their skully friend without too much fuss.

The bard of the party decided to Spout Lore on the rolling skull- since he succeeded at his roll, he decided that he'd heard some sort of tale about this rolling skull. I decided his name was Roland (get it? Rollan'? Hyuk) and it was the head of a greedy adventurer who turned to evil. He always rolled towards treasure*** and that's pretty much the sum of him. They rolled him as he rolled his way into a room with a pile of burnin' bones. Between the arcane duelist and the bard, they managed to figure out that the fire was both magical and fake, although they spent a while figuring out if it would burn them. And what exactly the nature of the falseness was. Was it not actually magical fire? Was it "fake" magical fire? Was it fake "magical" fire? Spent the better part of ten or fifteen minutes puzzling over that one, to the point where even I was confused. They stuck their hand in and it was fine- and the skull came rolling out with an enormous purple gem!

They tried to corner it, but the skull kept on a-movin', and their efforts were in vain. Heedless of the dangers, they sprinted on- directly into the clutches of skeleton mage and his cronies! Behind them were even more skeletons, too! A pitched battle ensued, where they played skeleton ping-pong, hid behind each other, used the power of rock to clear away a necromantic fog, and spun like ballerinas into their foes. They ended up the victors and we had to cut it short because one of our players is a good five hours ahead of the rest of us and had obligations. Which is fine! We cut it short at a good resting spot and called it a day.

I think most of them leveled up (of those that were there) and I'll probably be talking to the ones that didn't show up and making sure that the time is good for them. It was a great session! Here's hoping the next one is at least as entertaining.

* Which felt bad, at first, but I'm hoping it wasn't my fault; I like to drink and DM and sometimes I get carried away by the end of the session. Or maybe it was just boring the whole way through? Maybe he was just goofing off while we were winding down?

** I just realized I missed an opportunity to give them sombreros and really play it up. Damn it.

*** Sometimes it's fun to confirm a hunch of your players, especially when you didn't actually plan it that way. If you keep your plans very loose, it's easier to change them to better fit the current mood and style of your players. In this case, I'm pretty sure that one of the players literally said "Well what if it leads to treasure," and that's a great damn idea. Treasure-seeking animated skull!