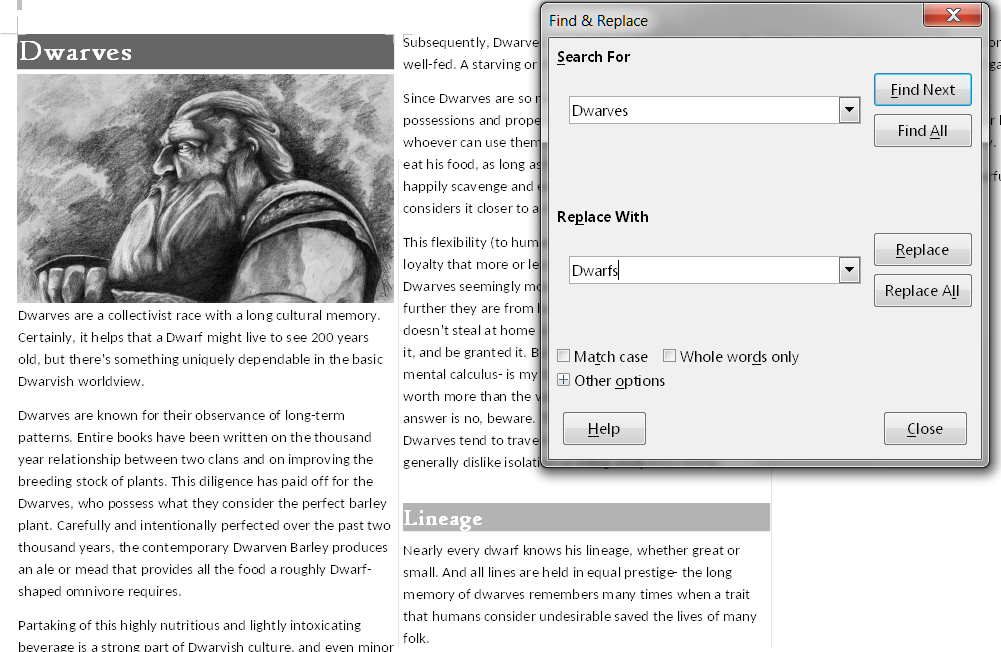 For posterity purposes, I have recorded this stage of the production.

I started this idea today, and it's coming along rather nicely. Or, at least, the formatting is. The game itself? We'll see. It's been a lot of fun to take this from zero to half-finished PDF in a single day, and I'm hoping that the framework is robust enough that I can get some real meaningful games out of it. Wish me luck!
By Nick - September 27, 2016 No comments:

There's a very tiny sliver of people who like sociology-flavored fantasy races for their tabletop games, but by god we like to write things too! So this is how I spent part of my morning.

Each race is internally consistent and has unique but recognizable cultural aspects. What do I mean by that? I mean that my dwarves only ever drink beer and it makes sense. Elves are all distant arrogant philosophers and their written culture reflects that.

Here, check out what I mean:

Highlights, if you're on the fence:

"because they spend so much time looking at long-term patterns, they've become quite the masters at older techniques. a dwarf never abandons an idea, they just modify it and keep re-using it. as it turns out, that applies beautifully to plants and agriculture in general. dwarves have managed to produce a certain kind of barley that provides nearly all the nutrients that a dwarf-shaped omnivore might require. "

" goblins will co-exist with other races and can be found making a sprawling society even in the harshest lands. this means that in particularly barren places with excellent resources, goblins will sort of naturally collect and fill the available space. this means that other races, when expanding, often need to expel the local goblins to gain acccess to, for example, mines and groves. goblins also especially make their homes in abandoned places, and any place not kept closed and used actively quickly finds itself home to a goblin's ever-expanding brood."

Warning: this is only half-finished.

I haven't had the motivation or the time to work on this like it probably deserves to be. It's sort of mostly finished, but there are a couple of things holding me back.

1) There really should be more monsters, at least more iconic monsters. I expect for GMs to create their own monsters as they see fit, but getting people in the right "spirit" should make things a little better for everybody.

2) Some of the classes are half-finished. I constantly rethink and revise the classes based on how I'd like overall combat flow to go with them. The social aspect of the game is underwhelming and the dungeoneering is basic. But it (hopefully) all flows in a satisfying way to create a combat that's engaging not just for its own sake, but for the sake of the story. My point is that as systems shift, sometimes classes' existing abilities no longer fit, so I have to rework what it is that a druid does, for example.

3) Formatting, art: I'm slow at both of these things. I don't make my own art, so that means scavenging google images and hoping the creator doesn't mind.

5) Dungoneering refocus: Right now, the game is combat heavy. There's a functional dungoneering section but it's scattered across a dozen pages and plus the exciting stuff on your character sheet doesn't interact with it.

I am the DUNGEONMASTER 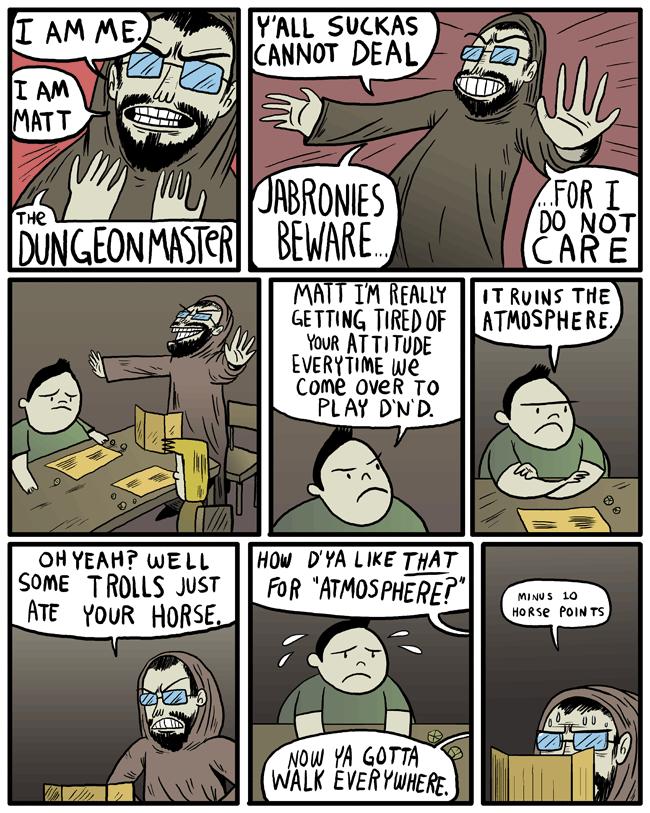 I don't actually act like this when I DM, but I could. I do openly attempt to manipulate people by giving and removing horse points. They don't do anything, and it's no secret. But I've seen people trading horse points to win minor arguments, or bragging that they have more horse points.

They're a sort of ethereal wisp of a currency, but they're still a currency inside of my group, and I think that's wonderful.