Arkham Horror, or How I Got Murdered By An Old One


Me and the wife were playing Rayman Legends for a while yesterday. She was playing by herself first while I was playing Sim City, but the game is more fun with another person. So I hopped in and we gathered Lums and saved Teensies. Pretty fun. For a while.

I got tired of the game, but we still wanted to play something together. Why not Arkham Horror, I suggested? It's gathering dust and besides, I'll make you a drink.

She said yes, and away we went.

We played for a solid four or so hours. That's two games in a row. It includes getting wasted, goofing off, and explaining all the rules and how to win. It was a great time.

Our first game we squared off against Ithaqua. She was the researcher (which looks a lot like her, believe it or not) and I decided that plucky salesman Bob Jenkins was my speed. We lucked out and both somehow managed to start with Tommy Guns and off we went, spraying demons with bullets. I explained that we have to close the gates before Ithaqua comes out to see what's crackin'. She asked how we do that.

"You gotta go through 'em and come back!"
"I have to go to The Great Hall of Ceelano?"
"Well I'll be going through that one, but that's the idea."
"Oh, cool."

We forgot that Ithaqua brings icy winds that reduce your stamina when you stand out in the street, but we had a hell of a time anyways. The Elder Sign I used to close the portal in The Woods turned out to be a serious boon; every other Mythos card tried to re-open it. The Witch House ended up being home to a couple of Warlocks almost the entire game. The researcher went unconscious due to some poor rolls against a Dhole. Some good portal closings got us rid of most of the more nightmarish monsters, and good sneak rolls got us the rest of the way.

The streets were drowning in monsters. We were down to our last handfuls of sanity and hoping beyond hope that the seals were enough to keep the doom at bay. We finished the game when Ithaqua was two doom markers away from coming to visit.

Six seals down. That'll do it. We saved the world!

But the night was still young-
so we played again! 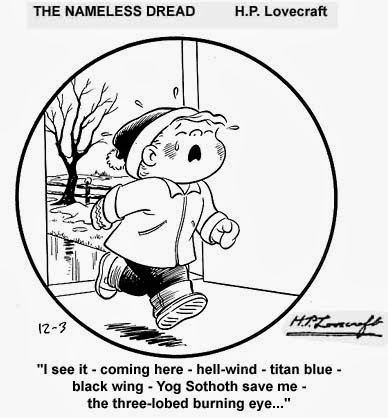 This time it was the scientist (me) and the student (her) stopping Yig, with his serpent cultists. I picked out Yig since he had such a small doom track and he got extra doom when you killed a cultist. I figured battling an old one might be a good change of pace from the skittering scurry of avoiding him.

It turns out that we got screwed by luck- an early Mythos draw accelerated the doom track unless we sacrificed an Ally. It was the second turn and we didn't have any Allies. We fling ourselves through portals and do our best, but it wasn't enough. Yig comes.

It smashes half of our items and gives chase.We have to make more and more difficult speed checks or we lose stamina and sanity. It wasn't long before we are overcome by our eldritch enemy.

So two games- one win and one loss. Not bad. Here's to hoping next game comes soon and we can squeeze out a win. I'm thinking Azathoth next time, or maybe Nyarlathotep. Azathoth is cool because when he awakens you automatically lose (he destroys everything immediately) but at least you have time to stave him off. Nyarlathotep is neat because he has unique minions although I don't much like his depiction in Arkham Horror. Oh well.

Anyways, it was a great evening and I'd do it again any time.


One last thing: It's still totally bullshit that she travelled to the Plateau of Leng to take a nap and find two bucks. I'm running through monster-ravaged streets, machine-gunning eldritch horrors while she goes on a vacation. I go to the the City of the Great Race and am driven nearly mad by the unending horror. She goes to the R'lyeh and it's a little smelly and then she gets more items. Why can't Bob Jenkins get a break?

I'm in the market for a new game to play with my wife, and I've been thinking about card games. We both like to play cards, but we're both tired of our old standbys of Gin Rummy and Egyptian Ratscrew. We had tried Dominion, the deck-builder, but ran into some problems. It turns out that she only likes the game when she's winning, and also that we're only having fun when she's having fun. So Dominion got shelved.

But it's not a big deal, since that means we get to try out new games. My go-to game is, and always will be Magic the Gathering. It's a complex game and rich game, with great art, and if you make your own  cube you've turned the game into an LCG.

Of course, if you're going to turn a game into an LCG, then why not just try out one that started as one?

The big three that seem like they'd work best in my home are the Game of Thrones, Warhammer Invasion, and Lord of the Rings. 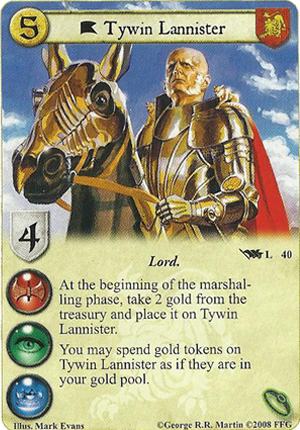 The Game of Thrones game seems pretty robust. The theme is great, since we both love the Song of Fire and Ice series, and the card art is beautiful. The decks in the starter edition each correspond with the great houses in Westeros, and two more houses are in expansions.

The goal of the Game of Thrones cardgame is to amass 15 power in any combination of military, political, or intrigue. There are plots, characters, titles, and a couple of interesting mechanics. Attack and defense seem especially interesting, and the way gold works seems to be satisfying.

There is (or was) a competitive scene, as well, so there's at least enough depth to sustain that community. That bodes well for its lasting appeal. It might not be the kind of appeal that me and my wife are looking for, but that's still appeal. 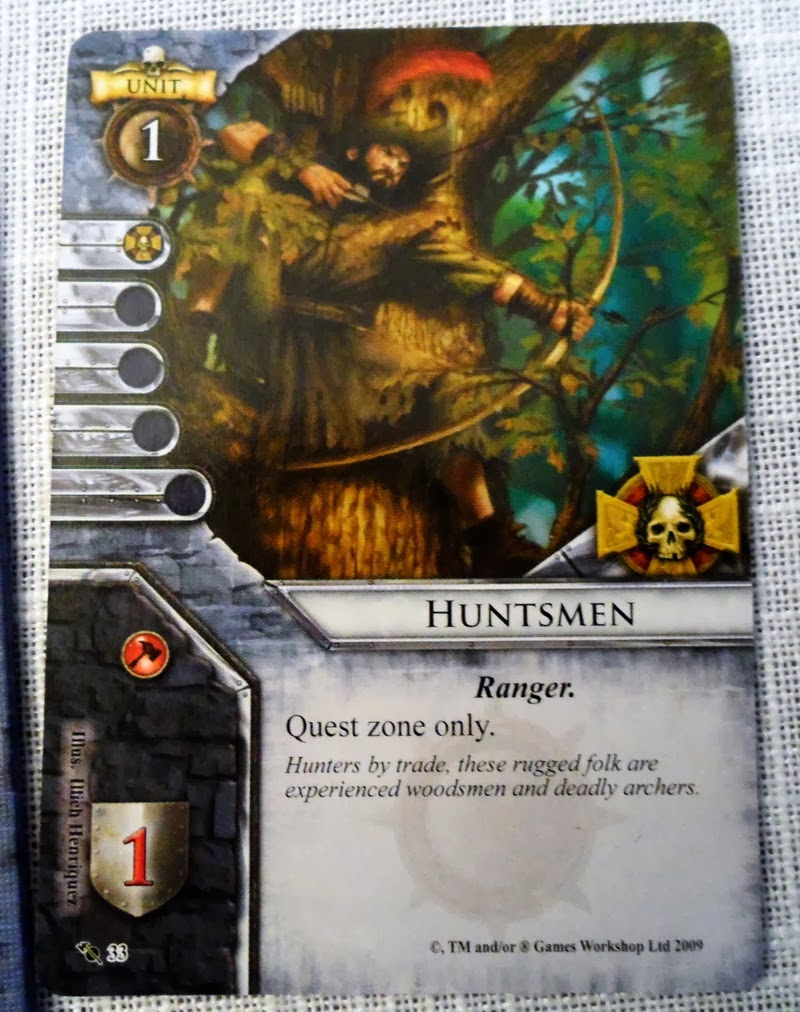 Warhammer Invasion is in no way related to the Game of Thrones cardgame, despite sharing the same publisher. The art doesn't seem to be the same level of quality, and the faces are messier and more difficult to read. But it does have its own charm.

Warhammer Invasion focuses on three zones, which either let you attack, draw you more cards, or net you more resources. The goal of the game is to destroy two out of three of your opponents' zones. The game seems simpler than Game of Thrones, which could be perfect for playing after a couple of drinks late at night. The game also seems to run longer than the Game of Thrones cardgame, which might be a problem- but who knows? It's possible that the hour of play seems short when you're in the thick of it, and that we both wish it were longer. As long as it's designed so that the trailing player can catch up with a bit of luck and good decision making, the game should be fine.

The last game I was considering is the Lord of the Rings LCG, which is unique in that it's cooperative. Each player has their own deck with three heroes in it, and the players work together to defeat the challenge deck. In a players' deck are allies, attachments, and events, which they use to try and complete the quest at hand. The players lose if they run up the threat counter (which acts as a sort of timer) or if they die. It's important to balance progression with safety, and offense with defense.

The LoTR game works as a solo game, too, so on the chance that it doesn't hold the wife's interest, at least one of us will get some use out of it.

As a side note, the Lord of the Rings game seems to have the best art, and we both adore the theme. But it's cooperative, which might not have the kind of staying power that will last us a long time. It's hard to tell in advance- she doesn't much like losing, and having us both lose sometimes doesn't seem like much of a way to spend a night. Plus, too, if she gets knocked out early (somehow), who wants to watch me play through the rest of the game solo-style?

It's a hard question, and I'm going to have to scour through a dozen more forums before I think I'll have my answer.There's no sense rushing into a decision that neither of us will appreciate in the long run, and we've got a bit of time to decide.
By Nick - March 06, 2014 No comments: 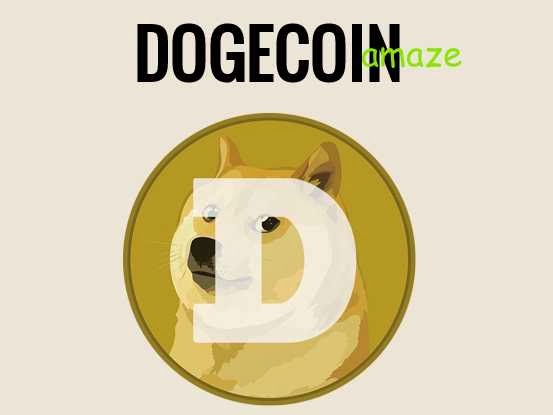 I am now the proud owner of a Dogecoin wallet! I figure that with all of this hullabaloo about people losing digital millions through a totally unregulated currency, I might as well get in on the next big thing and lose a couple million of some fake currency, too!

So if you ever read something on here and are all like "damn that was a pretty good read, if only there was some way to give the author a fake currency that's worth fractions of a penny," send your Ð to D8cjRvTSeTdjnXd9vDyUstdxSfks4Qia7E and I'll know in my heart of hearts that I am truly loved.

I upgraded my TV from 24 inches to 50 inches this weekend, so I've been spending my time on the couch with my woman, playing video games.


She had half the day off yesterday (it's snowy and icy), so we celebrated by playing Rayman Legends. 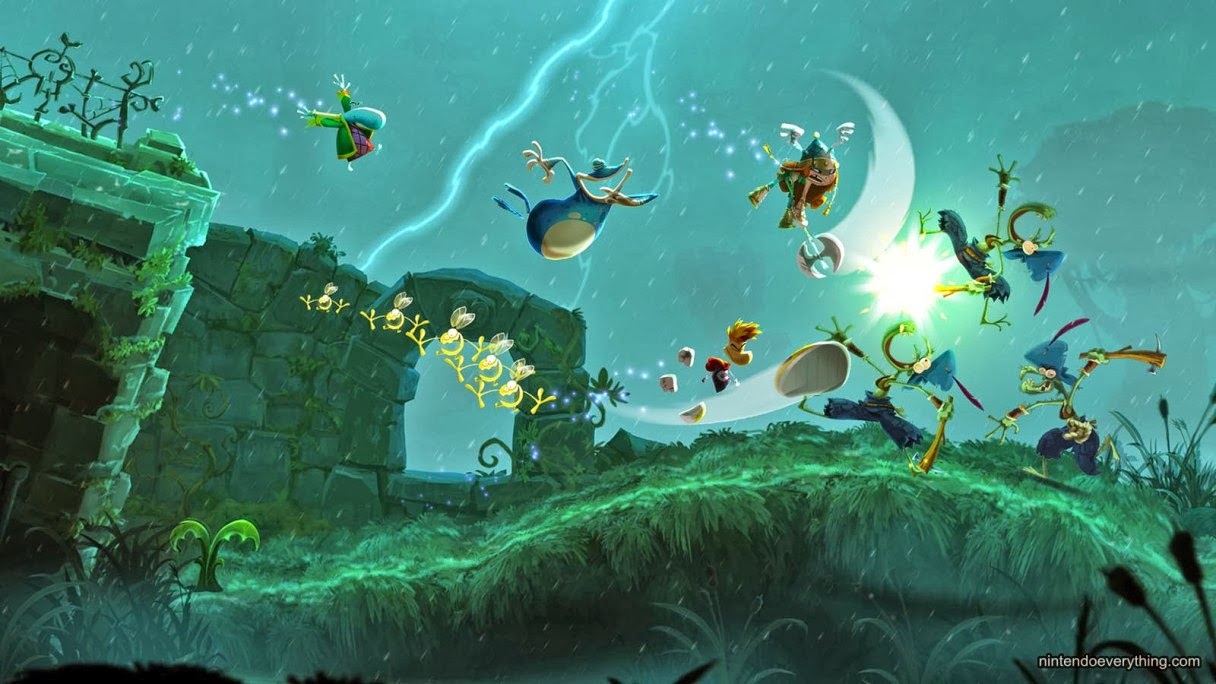 If you ever said to yourself "What happened to the joyful exuberance and pure gameplay goodness of the games of old?" or "I'm tired of playing games that are made by committee- give me a game with spark and spunk!" then you need to go get Rayman Legends because holy tapdancing christ this game is good. It's visually gorgeous (that's a screenshot above) and the characters are charming and kinetic, the soundtrack is tone-perfect, the levels are clever and fun and full of little secrets... The game feels loved, in every corner, and in every way. It's brilliant.

Other than that, I'd been replaying some Dragon's Dogma, which is painful since I'm in NG+ and totally unprepared, and I'd wanted to try out The Last of Us' online multiplayer but it costs money and I don't know if it's dead. I'm just not ready to make the $10 plunge to possibly play a game "online" by myself. That's what we in the "cheap ass" business call "silly shit."

For real though: doubling the size of your TV is pretty cool. I recommend it.
By Nick - March 04, 2014 No comments: