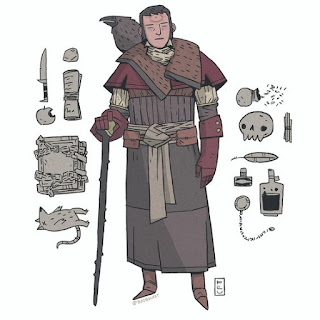 Items:
Grandfather's Skull- Gervan's grandfather taught Gervan magic from beyond the grave. When he died, his skull was attuned to his bloodline through a dark ritual and so the skull itself talks to Gervan in a hollow, reedy voice. It was louder when he was younger. These days, the skull is very quiet, and Gervan must meditate to get any information whatsoever out of it. Gervan doesn't quite know why.
Dead Rat- Gervan's discarded this rat multiple times, but it always ends up in his backpack or under his feet, or wherever, just as soon as he thought he'd gotten rid of it. Gervan assumes it's part of some curse he's accumulated, or something.
Bound Grimoire- This book wants to be opened and read. Unfortunately, it's full of vulgar nonsense.
Ritual Knife- Doubles as a weapon in a pinch. 1d4 damage, melee. Light. Throwable.
The Duke's Permission- Gervan is a licensed sorcerer, with permission to practice from the Duke.
Quill and Ink- Kronk is a good messenger and will carry small belongings to and from Gervan's contacts.
Bag of Bone Dust- An important ingredient in Necromancy rituals.
By Nick - February 03, 2019 40 comments: