I'm linking this link thirdhand, because I can. Dr. Rotwang has a post entitled D&D Is Dead. And honestly, I couldn't agree more.

As a product, it's nothing.
As a hobby, it's still pretty huge.

This leads me to another point: it's really boring and really tiring to hear people complaining on OSR blogs. I love the energy, I love the enthusiasm, and I understand that sometimes we all get a little grumpy when people are being idiots about our favorite hobby, but the reason this blog exists (and probably the reason a lot of other blogs exist as well) is that we just can't contain the sometimes-manic outpouring of energy and enthusiasm we all have for our favorite products.

Borders is going out of sale, so I went down to my local variety and saw what was up. It wasn't a huge shock since I've lived in my current area less than a year, but it was still weird to see when the grandiose bookstore architecture is combined with a sort of doomed vibe. Very interesting. The signs are coming down, the employees are sort of, well, off, and the sales are great.

I had to pass up on a copy of the Malleus Malificarum, which actually is something I'd wanted to buy for a while now, in favor of The Histories by Herodotus. Which is something I'd wanted to buy for even longer now. It's sort of like The Republic or Thus Spoke Zarathustra, except where those are both kind of dry philosophical tomes, the Histories so far reads like a conversation with a very erudite but possibly senile old man. It's got a lot of interesting information, and it helps you learn a lot about the subject matter, but it treads equally in the actual histories of Herodotus' day and in random and bizarre gossip and mythology.

It's really a lot of fun, and it's an unbeatable deal at $8.

I'll get around to posting more stuff soon. I've been busy with classwork recently- between Physics and Precalculus I find that most of my most productive imagining time is quickly vanishing.
By Nick - February 25, 2011 No comments:

One of the key points about yomi, I think, and about mind-games in general is that there isn't any sort of feinting and counter-feinting unless you have an opportunity to do something about it. In other words, your actions aren't a sure thing anymore. When roleplaying online, or "RPing" (a term which I've always hated, but which seems to be the accepted term these days), it's considered common courtesy to only state that which your character is trying to do.

In other words, it's not "I kick you in the face and knock you over," but "I attempt to kick you in the face to knock you over" and then the other person agrees or disagrees, depending on their personal preference. Of course, in that case, there's a lot of dodging and blocking and negating going on, because it's a freeform system and there's no reason for anybody's avatar (usually riddled with overly masculine or feminine "cool" traits like being half-demon or having angel wings or unusually colored hair or some silly such, but that's neither here nor there) to get injured or killed or whatever.

But I digress. The important thing is that actions become interruptable, somewhere between where they start and where they end. And that's why I said in my last post that yomi and mind games have been in D&D all along.

Most people have had experience with magic-casting, and the way it's somewhat balanced by having the magic-user declare their spellcasting in the beginning of the round, and then having it occur sometime near the end of the round, after the guys with swords and arrows and the guys running across the drawbridge or wherever the hell they're going, then the wizard gets to throw his mighty fireball across the temple, or whatever it is that he's doing. If somebody even tries to put a sword in his guts, the spellcaster probably fumbles his spell.

So what you have is a sort of simplistic mind-game, where the wizard is trying to hide and the warrior is trying to skewer him with his sword, except that the wizard doesn't have a counter to the sword-stabbing. He can only run for his life, and the warrior can follow. The wizard needs something of an outside force to stop the warrior, whether it's a trap or mechanism or even something as simple as other people to stand in between him.

(Which brings me to an interesting parenthetical notation: maybe D&D's as popular as it is among Americans because of its fairly clear-cut class roles that are very similar to football; the wizard's the most important member and needs to be protected like the quarterback- the dwarfs and fighters are the linebackers. I dunno what the theifs are, but they can be the wide receivers. I dunno.)

The point is that there should be something the wizard can do to counter the warrior's rushing onwards other than "have other people deal with him." Wizards, both in movies and in literature, often have quick-spells to throw at a warrior, often with illusion or summoning of henchmen or something. Sometimes it's lightning bolts or gusts of fire that startle the warrior and make him back off, right? Then the wizard runs up his tower, and he's got a head start already. In game-terms, maybe the wizard's quick spell could force a saving throw of some sort, and if the warrior fails it, he's got to waste a round (6 seconds or so, I understand) doing nothing, or maybe it's just that the wizard gets a head-start on the chase. 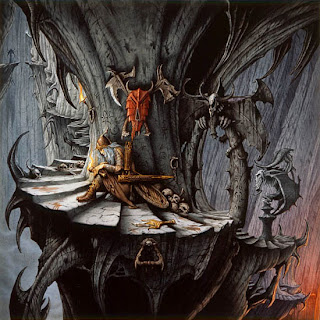 Of course, the warrior hasn't got a counter other than maybe he could choose to either run him down or steel himself against the magic, and that'd be a pretty decent yomi styled decision to make, too. As the warrior, you're probably not alone. If you run the wizard down, you have a good chance of catching him if he decides to run. But he's probably going to shoot a fireball or something at you and even if you know it's going to be fake, it's gonna be bright and loud and you won't be able to see. That's if he doesn't do something dastardly like rearrange the room so that it's unrecognizeable. But anyways, you could alternately hang back and wait until he casts and then squinch your eyes closed, and then you tackle him since he wasted his time wiggling his fingers and stuff and now you've got him.

As the wizard, of course, you have three options. If the warrior runs you down, you throw a quick distraction spell at him. Of course you had one ready- you forsaw this occasion as an emergency you might want to prepare for. You have to weigh your options. If he runs you down, you can throw the proverbial wool over his eyes and try and flee. If he stands there and knows what you're up to, you can take advantage of his hesitation to take off and get a head-start in the footrace.

I didn't find this out until yesterday, but apparently EN Publishing was having a $1 off sale on everything they published.

After raking through it, I found out that most of it was pretty poor. Far be it from me to knock other hobbyists' dreams, but who in the world is the target audience for Blackhammer Tech: Shape-Memory Polymers, or E.N. Arsenal: Hooked Hammer. I mean, really. They're both roughly 30 pages for ~5 bucks, aimed at people who play 3rd edition D&D or its derivatives who still have not quite gotten their fill of excessive rules. It's like they're imagining somebody saying, "Hey, you got any prestige classes I can multiclass into that focus on the Hooked Hammer?", and then having somebody go, "Yeah, man, I just bought this sweet PDF, you should check it out!"


But I digress. Heavily. I meant to say that I managed to pick up 5 PDFs for the healthy price of $5. They are: The Elements of Magic by Matt Blakely, The Dark Art of Visceromancy, The Elements of Magic: Mythic Earth, The Fantastic Science: A Technologist's Sourcebook, and Wild Spellcraft. The only two I'm really expecting anything interesting out of is Mythic Earth and Visceromancy, but the rest of them were too deliciously-priced to pass up.


As you can see, I'm interested in getting some sort of new magic system, and, more importantly, looking for something to save from the rules-bogged 3rd edition morass and bringing the raw, beautiful gems into a more rules-light focus, where you can look at the ideas themselves without trying to figure out exactly the best build for your Wizard3/Necromancer7/Visceromancer2/GreyMage1 or whatever. There's nothing wrong with that sort of gaming, per se, and there's no reason you can't enjoy it. And with an almost identical reasoning, there's no reason I can't lament that good creative minds were wasting so much time creating so much for it when there's perfectly good systems with less baggage attached. After all, when you're trying to describe how, exactly, the Dread Lumpherant snatches up its victims, wouldn't you rather not have to worry about whether giving it a Swift action instead of a Standard action might warrant moving its Challenge Rating up 2 points since it can combo it's Fearful Grab attack with its Rend and give it 5 attacks a round? Sounds boring to me.

Before I forget, on a quick skim of the Elements of Magic, I just want to say that the art is awful. Absolutely awful. The whole book is garish, the inside peices are lame, uninspired, and fairly painful to look at. I can only hope it was done by an amateur; if they paid for it, they paid too much.
By Nick - February 01, 2011 No comments: