First, real quick: I'm not talking about the increase of hit points by edition. I actually like that the starting pool is bigger in, say, 4e, and that this is going to feed into one of my fundamental dissatisfactions with the old editions.

In old editions, you'd get roughly 1d6 hit points per level. Which just so happens to be the default amount of damage a weapon deals. Which is neat. One hit can equal one kill, just like in real life, or maybe it takes two or three solid chops with an axe. Good, right?

But why, then, do you get another 1d6 hit points at second level? And another at third? It bugs me, because now you're asking me to believe that a person is able to be chopped in the body parts between two and twelve times. And then three and eighteen. Even if you assume that you roll average hit points and always get average damage rolls when you get hit, you're still taking twice as many hits, on average, to be slain by the same sword. And that's really weird. 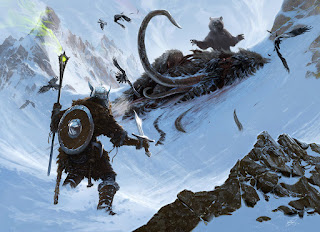 I know that hit points, according to the books, represent "luck and chance" and stuff, but you also recover this "luck" at one point per night of rest and getting hit in the face by a sword apparently reduces this "luck" so let us call a spade a spade and say: Yes, these adventurers are absurdly tough. At the highest levels (9) even the frailest wizard is capable of taking six average stabs to the chest. You know that scene in Conan where dude cuts the head off of Thulsa Doom? Imagine if it took him a couple of whacks instead. Not so exciting.

Probably a better way to do things would be to boost everybody's hit points up to 6 or so, and then have them stay there. Then, when characters gain levels, instead of having them get more hit points, have them get more defense. You could probably restrict this to fighters or whatever your closest warrior equivalent would be in your game of choice and nobody's really notice. This way hit points narratively go back to being what they were supposed to be in the first place (a mechanical description of toughness) and you have warriors who actually learn how to defend instead of just learning how to slash things better. Two birds with one stone.

One last thing it does: It makes monsters scarier. When you fight an ogre now, one of its main traits is being goddamn tough, which makes sense, given that it's a really, really big monster. And when it hits you for 2d6, well, that's a problem if you get hit, so you need to make sure that's a thing that doesn't happen. You should bring a shield and some armor, or else use a big to make sure it doesn't get the chance to hit you before you disembowel it, or nail it with some arrows.

You can leave the other things player characters get alone. Those things are fine the way they are, I feel.

But I've been trying to "fix" the cleric for years now and I just don't think he's a good fit.