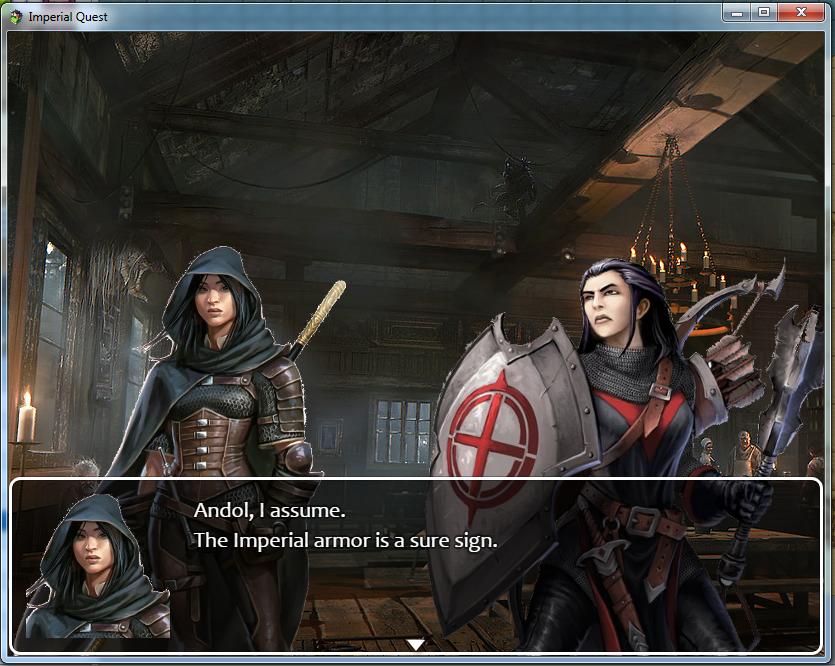 I don't really have any artistic skills, so I'm mostly just saving art from the internet and using it wherever I can. Since I'm not drawing any of this stuff (and I don't particularly want to use the default tilesets or character art or whatever) it means that I have to take a couple of measures to try and maximize what I do have.

Dialog screens, so far, look a lot like this. The characters who are talking stand over top of a scene, and then the messages display below.  I've actually got a bit of branching dialog going already.

A lot of this stuff is pretty simple. I've been DMing for a long time and I used to write for money, so this sort of thing comes pretty easily.

In this scene, Andol (the warrior on the right) is meeting Thalia (on the left) for the first time. Andol is still injured from the introduction battle, so you'll get an opportunity to rest. This is still basically the tutorial. Andol is a Captain, which means that she's got party buffs and decent physical damage. Thalia is a Rogue, so she's got both damage and utility. They're designed to work together- Thalia can spend TP to do a double attack, and Andol can spend TP to buff the entire party's Attack and Defense. So a good strategy is to save up your TP and have Andol shout and Thalia go to town double attacking. Andol can also just Power Attack if she needs to do damage, and Thalia can Throat Punch to silence annoying casters.

After you rest, Andol will gain experience, and then Thalia joins the party. I think that you'll also gain some items, but I haven't implemented that. It makes sense that Thalia might have some potions or something that she'll share with the party (such as it is.) I haven't decided what Andol gets at level two, other than stat point increases. I actually wrote a pretty simple script that lets you (the player) decide what she gets as she levels up. I'm not sure if that's something I'll let you do for every character, or just for Andol (who is basically your avatar.) [1]

The party continues on after this, and will go towards the tomb where Cawain is busy disturbing the dead and searching for forbidden artifacts. You know how wizards are. This is also where you'll meet the next member of the party- a sorcerer named Bevior. As a spellcaster, Bevior interacts with a couple of systems that we haven't touched on yet, so that should be fairly interesting.

[1] I'd like to add Dragon Age inspired conversational options to the characters throughout the game, and some sort of stat tracker to see how well you're getting along with your fellow party members, because I think that sort of thing is a lot of fun. Social systems are pretty cool, even if Bioware tends to make them pretty weird. I don't plan on having the characters sleep with you if you give them enough gifts or anything.
By Nick - August 29, 2017 1 comment: 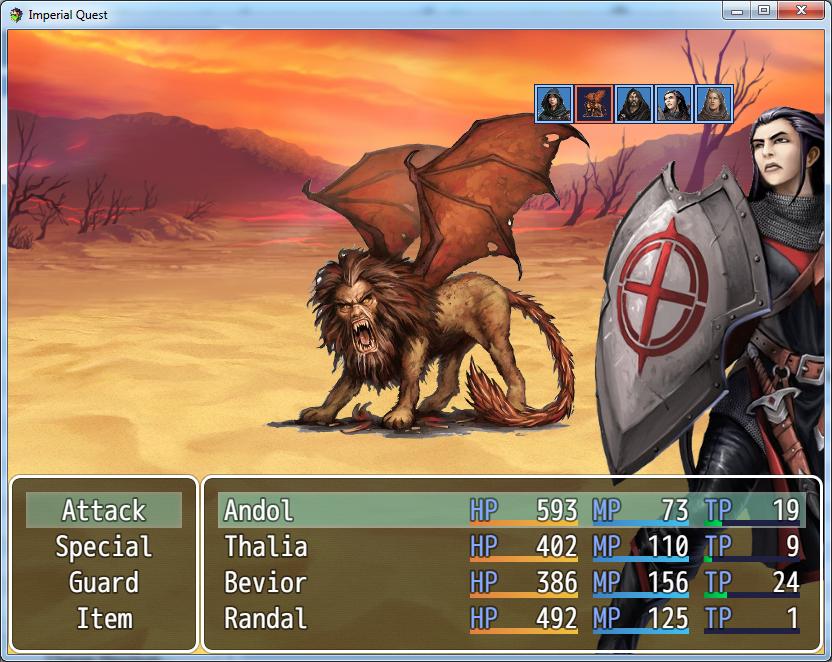 I got my hands on RPG Maker MV and I've been having a little bit of fun with it.

By default, it's set up to let you make a fairly traditional JRPG, but honestly I've never been much of a JRPG fan. I get lost wandering around their big sprite worlds, and I don't really like random battles. [1]

But I do like game engines, and RPG Maker MV has quite a lot of plugins that let you redefine pretty much anything. Javascript is apparently easy to code in, not that I would know. But it does mean that I can assemble the game I want and then keep on rolling forwards.

In this case, I've been borrowing still images I found on the internet and using the magic of the game engine to paste things together. As an example, you can see that Andol and company have started a battle with a Manticore. You can't see it from this screen, but they all have unique items equipped, and a variety of skills. Andol can Shout, giving her entire party an attack and defense buff for a couple of turns. Thalia is a Rogue with double attack- for a mere 5 TP she can attack twice in a row.

Bevior is the Sorcerer, and he knows a fire spell that applies a damage-over-time burn effect sometimes. Since he's level 5 (something else you can't see on this menu screen), he also knows Thunder Storm (multi-target air element damage spell), Cauterize, and Energize.

Randal is an Elvish Cleric, and he knows Sunbeam and Armor of Light, and he can spend 5 TP to cast Prayer, which heals the whole team.

The Manticore, for its part, is pretty dangerous. It can actually take multiple actions per round and has two attacks- Double Attack (the mirror image of Thalia), and Spike Volley, which launches three attacks at random enemies. Each attack deals damage and has a chance to poison. Oh, and it can also Howl, which is an Air element attack that also lowers its enemy's damage.

I plan on continuing to tinker with the game- what I have so far is the product of my screwing around with it after work and on the weekends. Once I have the battle system nailed down, my next step is to figure out a way to move the party from location to location. I don't want to use the standard JRPG convention of moving a little walking figure around, so I'm thinking a location menu? I haven't gotten that far yet.

My current sticking point is the lackluster item investigation screen, which only shows a handful of stats and is hideous, to boot. I need a system that lets me show the traits that I've given to items, if nothing else.


[1] Too much ludonarrative dissonance, plus the idea that violence is something that anybody can stumble on (and that even intelligent foes fight to the death) is really weird.
By Nick - August 27, 2017 1 comment: