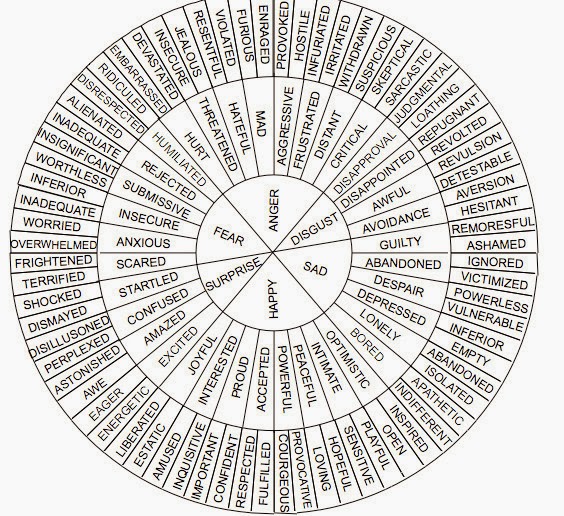 This is, apparently, called the Feeling Wheel.

There's a lot of overlap between Psychology and tabletop games, and this wheel categorizes emotions in a way that I'd honestly never thought of. You could turn this pretty easily into a "random emotions" chart. Just take the chart and roll 1d6 if you want your basic emotions, or consult this longish chart I created if you're looking for a more subtle emotion for your randomly generated needs.

Not bad, right? Randomly generate a person using your favorite ruleset and then give him a random emotion to be in the throes of when your bold adventurer's party meets them. Help visualize the emotions of the mighty villain you just rolled up by randomly generating him a dominant emotion! Why decide between Guilty, Frustrated, or Joyful when you have this chart?

Create a Helm of Emotions and have the players be in-character consumed by a completely random emotion each and every morning!

Or possibly something you just thought of now that's probably twice as creative as what I thought. It's your game, probably. If it isn't, maybe it should be?

Anyways, here you are. Please enjoy. 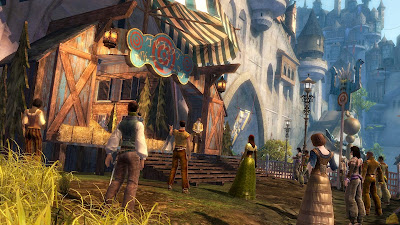 I've been playing (and thinking about) Guild Wars 2 instead of tabletop games.

If you've been living under a rock, Guild Wars 2 is a non-subscription based MMORPG that manages to feel completely different from World of Warcraft and its multiple clones in a couple of really massive ways. Luckily for me, they're also great ideas in their own right that can be used in your average tabletop game. Each of these are pretty big ideas, and they really each deserve their own article- but lemme give you the quick overview.

Fairly standard is the way that you can pick race and class, so I'll skim over that. Each class is available to each race, and, interestingly, each race has optional abilities that they can eventually learn, in about the middle of their progression. A Norn can eventually learn to turn into a bear or a raven, if they want, or stick to the regular abilities they'd normally learn through their class.

Once you start the game, you go through a quick introduction that serves to immediately let you know what the major conflicts in the world are. Humans fight some invading centaur (which feature heavily in the human zones, but I'll get into that later), Charr battle against the ghosts of the king they slew to reclaim their ancestral lands, Norn fight an enormous ice worm, and so on. The things you do in your "personal story" always take place in single-player only scenarios, and serve as a unifying thread to the things you're doing, which is pretty useful, because the entire rest of the game is fairly open world.

There aren't quests, in the traditional sense (except for your personal story); instead, you travel to a level-appropriate zone and either react to events or, if nothing interesting is happening, then you can help nearby people with their problems. You can easily identify what you're supposed to do, because you can either go close to them or just look at the top right of your screen when you're somewhat nearby. It'll tell you who the person is, where they're hanging out, and what they want you to do. The things they might ask you to do range from the oddly mundane (water my crops, remove graffiti, check the fish traps in the river) to the actually heroic (help the Seraph kill the centaurs, assist the wounded, recover stolen supplies). 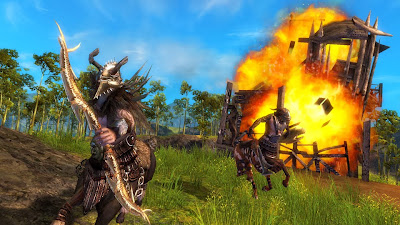 The neat part, though, are the events, which happen at any time and generally actually have an effect on the world. If centaur are invading, for example, you can get experience and "karma" (an abstract non-gold currency that can't be traded but can still be used to purchase items) for helping the defenders out. The awesome part is that the events chain into each other. If nobody helps the defenders, then the centaurs will take over and the inhabitants will flee, rendering that settlement useless until you recover it. If you win, then the settlement will occasionally send out strike teams to try and push them from nearby caves as well, and eventually mount an attack on the centaur settlement as well. If it succeeds, then the centaurs will be a non-issue for a while- until they attack again. And the events scale in difficulty, too, so you might be able to help out with a small skirmish on your own, but when the big guns show up, it's a group event and you're going to either hope some more adventurers hope up to help too, fight your ass off and try to win anyways, or just let them take it and come back later.

This sort of push-and-pull combined with actual effects on the world around you means that as you're exploring and trying to find things to do, you're met with multiple choices- and sometimes they work together. If bandits have put up a roadblock and are killing all the travellers, and this part of the area you're in wants you to help travellers or kill bandits, fighting in the event lets you double-dip. I've personally finished multiple "hearts" by participating in a single event.

The other neat thing is the way that groups are assumed to work. Each class is responsible for their own survival and for dealing damage, meaning that there are no required classes for group content, and there is no "niche protection," to use a tabletop term. Nobody is standing in the back healing. Nobody is standing in the front getting beat on. The DPS isn't standing behind the boss and hitting them as hard as possible. Every class is maneuvering around, attacking when they can, dodging when they need to, and laying down combo fields when they think it's useful. Instead of the top-down design of "bring 1 tank, 1 healer, and then as much DPS as you can handle," the game says "bring what you prefer," especially since changing up the weapons you've brought drastically changes what you class can do (plus you can bring two weapon sets, anyways.)

So you're thinking of the classes in terms of what they actually bring: what boons they can grant your party, what kind of combo fields they can place and what finishers they have access to, and what kind of conditions they can apply to your enemies. You're thinking about the classes in terms of their class, not in terms of their broad type. You bring a longbow on your warrior so you can set down a fire field that other classes can use blast finishers in to give you all some Might. You bring a staff on your elementalist because you see that your thief is using a shortbow and can blast them repeatedly. You see the other elementalist switch to staff so you equip your scepter and a focus, so you can use the finishers in the fields he's placing down. And so on. 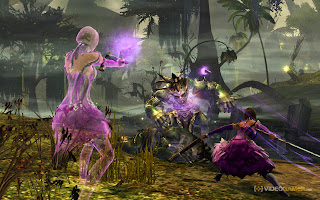 So that's quite a bit that you could add to your game. Planning out dynamic chains of events is something that people have been doing for a while now, and it's actually exactly what Dungeon World recommends in the form of its Fronts. Really, every dynamic event in Guild Wars 2 is a smallish Front in disguise and it's one of the freshest and most fun ideas in the game. So why not add a similar thing in your game? All you need are some things to happen and some people who need things done, and your players will happily occupy themselves and decide what it is that they want to do in the game.

Weapon swapping and weapon-specific skills wouldn't be terribly difficult to implement either. There are a couple of similar styles in any system of D&D you care to mention- with a bit of love, they could be as intuitive and as tactically interesting as Guild Wars', in that they become a toolkit to be changed during certain situations instead of a dull bonus to the only weapon you ever use. For example, instead of making a warrior choose between weapon feat chains, why not let him take them all simultaneously as he gains levels? Why not add different bonuses to weapons as the warrior levels? Why not let spells have a broader effect than stated, and let them be pushed around, thrown, blocked, or otherwise interacted with?

There are a lot of good ideas in this game, and I'd be very surprised if most of these elements weren't already inside of a half-dozen excellent tabletop games already.