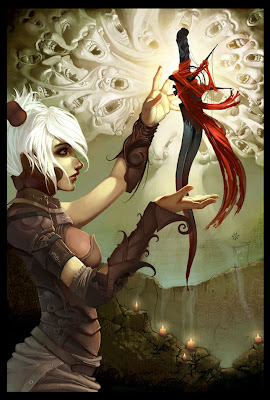 I want to write a game like HeroQuest, except suited to long-term roleplaying endeavors, or even quickplay style games. I don't know if I want to keep the grid combat (although I probably will because I have like a shit-load of Descent tiles hanging around and I've got to find some way to use them, other that Descent), which means that it'll still have charming rules like how long weapons can attack adjacentways.

And the players will be pre-written like in Descent, except I'll make it per-class instead of per-character, but the difference is really minimal since you're still just choosing an instance of a guy to play as for this next adventure- whether you're Gluthorm or Thornspell Mage is minimal if they both do an extra point of damage with Earth spells.

I've even got a copy of the Heroquest rules, and I think I'm going to skim over them and make a couple of changes, couple of additions, and a couple of tweaks to suit my preferred style of gaming. It'll be like a HeroQuest retroclone, if you will, but with the serial numbers filed off and hopefully enough stuff changed that nobody's going to get grumpy at me for doing it.