AIM FOR THE HEAD 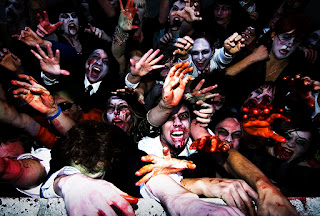 I'm releasing it here first for feedback from the five or so people who read and comment here.

It's a one-page zombie RPG. I actually had space to devote to setting, because the core mechanic is so damn simple and after that, it's all about setting anyways.

Zombie games are the ideal in designing a short roleplaying game, because so little can (and should) be expressed via rules. There shouldn't be hard and fast rules for what you find, what survivors are like, or what zombies can do. It's not important, and it shifts the game from "oh shit, what'll happen next" to "oh, whatever, that zombie has six movement and does 1d6 damage, that's not even a threat."

It's why fighting a zombie in D&D isn't scary, but it can be in Aim For The Head. One zombie can kill you if you get a bad roll in AFTH. Trying to run away can kill you. The only way to be safe is to not roll, which means playing carefully, keeping quiet, and avoiding attracting attention. In other words, the only time you're rolling in AFTH is when you're potentially screwed, and that's exactly the kind of on-edge feeling that a game should provide. I haven't playtested it yet, unfortunately, so there are likely some rough patches out of the bat.

The only thing I can think of off the top of my head that I'll likely change is that the Fight roll doesn't explicitly limit how many zombies you take down (I was thinking one zombie per 6), but intentionally left it blank for the moment.

Let me know if Aim For The Head provides that. I'll be taking all criticism into account, and changing the document to suit it.