Mall of the Dead

Honestly, I'm tired of having this in the back of my head, bothering me- so I'm putting it out for everybody to see.

It's a system built around AIM FOR THE HEAD, but I'm not picky and it's pretty system neutral. Since it's one page, you're treated to, basically, a couple of set pieces with a lot of room for improvisation. If you haven't figured it out by now, that's pretty much all I need to get a game going, and that should be enough for you. 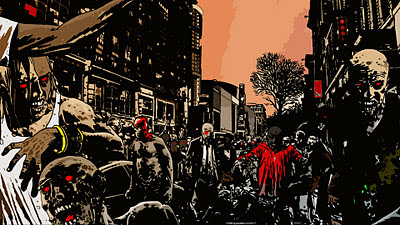 The basic flow goes like this (and this is going to end up being longer than the pdf itself, if I'm not careful):
1) The players' survivors are in a department store where they've been hiding out- the zombie apocalypse happened while they were shopping, and naturally nobody bothers to tell the people at the mall, so they're stuck. The players can hear a helicopter going overhead at roughly the same time each day. Might as well try that, there's shit else to do.
2)The players emerge and the mall's nearest entrance has been smashed to shit by somebody driving a truck through the mall. Near the smashed wall is a horde of zombies, who are prevented from rushing in by the wreckage. Bad idea to try and go through, but if the players can swing it somehow, their car could be out there.
3) The only safe option is through the mall. There are lots of little stores which could have something, but they could also be time-wasters with nothing but zombies and gore. Its up to the players.
4) The players get to the food court, where it's open enough that there are way too many zombies. Zombies eventually fall from the enormous skylight, raising one hell of a racket. That's bad.
5) The players are left with a choice- try and go out to the other parking lot and escape via car, or try and hail the helicopter. Up to them, really.
6a) If they try the helicopter, there are still more zombies up here, as well as a firearm. If the players brought something to get the helicopter's attention, the chopper can rescue them if they're not being eaten alive. The pilots aren't going to fire their weapons, in case they crash somewhere horrible, they're going to need the ammo. The players might escape at this point.
6b) The players go to the parking lot. There are a whole lot of zombies out here, as well as zombies in cars and a pileup. The players' cars might be wrecked up, but if they aren't, they can escape- provided the roads are clear.

And that's the Mall of the Dead. It feels like it's missing something, but honestly, I could care less because I think that's all you need to get your creative juices flowing at the table. I'll probably go back and add more later, but don't count on it ;)