The Only Accurate Alignment Chart 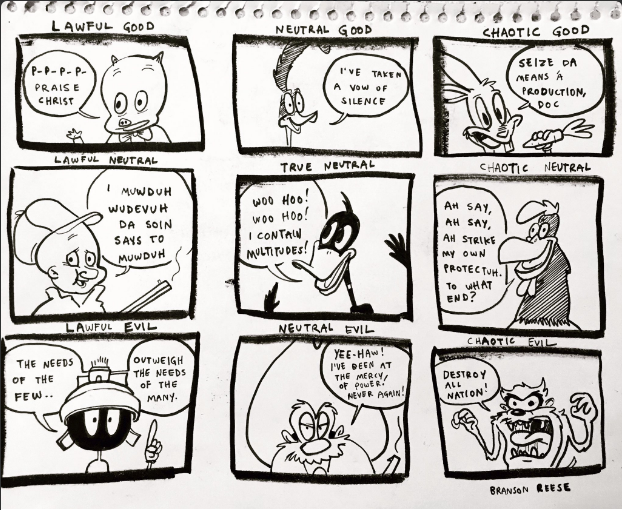 I know I usually post more substantive things but this popped up on my Twitter feed and I didn't want to lose it. This really is the only accurate alignment chart that I've seen! \

The other reason I'm thinking about campfire mechanics is because of one of my favorite games of the past couple of years: Renowned Explorers. If you haven't played it, here's the general conceit: 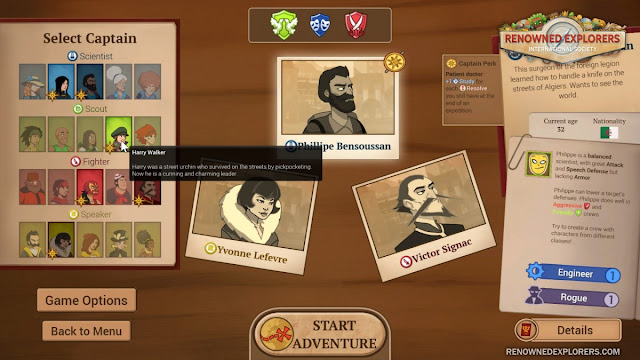 There are a large number of characters- choose one to be your expedition leader (this gives a unique bonus) and then two to be expedition members. Each character has one of a number of skills and abilities, and also approaches. Central to the RE experience is the idea of attitudes; that is, the effect of your actions on your opponents. Your attitude can be Friendly, Devious, or Aggressive, and so can your opponent. Each adventurer has three moves (and gains more); one each of Aggressive, Devious, and Friendly. Also important are moods and spirit- a mood can be either negative or positive. Whether it's negative or positive matters for the moods that can be applied by moves. Moods take the place of standard fantasy buffs or debuffs- for example, Excited characters have +25% speech and Enraged characters have 25% less defense.

In the middle of an adventure, you are allowed to build a campfire. The three characters relax around the campfire and you draw from a deck of cards. Each character has different campfire cards, and there are some basic generic cards that round out the deck. 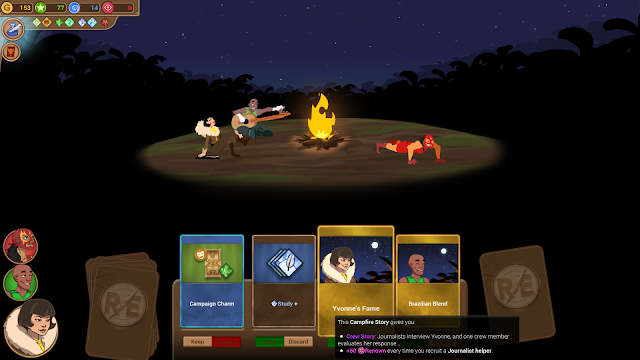 As you can see from this screenshot, the presence of Yvonne has included a unique card of hers, which provides certain benefits- in this case, a bonus when you recruit a certain hireling. (Renown are "victory points" and accumulating renown is how you the high score and a good ending.)

Pedrinho (the bald black man) also has a unique card. Every character does- every character has something that only they can do, and only when resting. Some cards are not particularly interesting- Yvonne's just gives you a bonus for something you were probably doing anyways, and it's not often practical to try and recruit many Journalists. They're limited in number, for one. But still, it's a decent bonus.

One of my favorite cards is for a Russian fighter named Ivan- his card halves his attack but gives him a significant bonus to speech, turning him from a formidable brawler to a defensive speaker (sort of). Once used, this change lasts for the entire game, with no way to turn back. It's a powerful bonus, but you have to have been ready for it. You have to have built your party around it!

It's a series of very cool decisions by a very savvy group of game designers, and I love it. I wish I could see more of it.

Darkest Dungeon has a really cool feature that I think is under-utilized in tabletop games: The Campfire Mechanic. If you've never played it, here's a quick rundown: 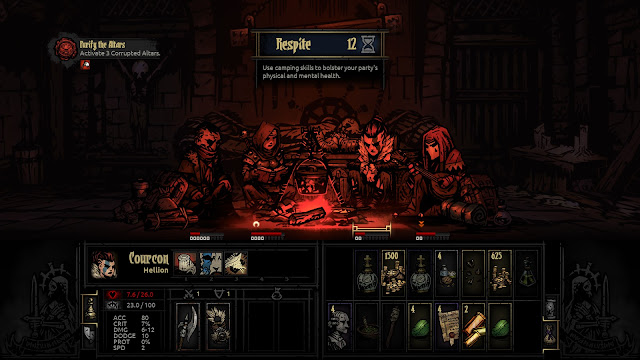 In Darkest Dungeon, you play as four heroes of varying class. You explore a dungeon in straight-passage sections. You encounter obstacles and opponents, both of which have varying effects on your health and sanity. You can bring items into the dungeon, and there's usually valuable goods there. You spend the money on better gear and more supplies for next time. If you lose all your sanity, your hero loses effectiveness- and if you do it again, your hero immediately dies. If you lose all your health, your hero immediately dies. Hero death is permanent and irreversible (without cheating).

On longer expeditions, you might be able to choose to rest. If you do, you are given X units of time. Each character has a couple of things they can do with these time units- characters can tend to each others' wounds, lead the group in a prayer, or perform occult rituals. You can't get some of these bonuses any other way, and a well-formed group will exit a resting state much stronger than it would have otherwise been.

On longer and more difficult expeditions, this resting phase is essential to completing the game's content. What a given character class can do at camp is an important consideration (although less so given the makeup of the game*), and I'd like to see that in a tabletop game.


*The balance of the game isn't perfect, and some characters happen to have both good campfire skills and battle abilities, and some don't have either.

Of course, part of the reason it works so well in Darkest Dungeon is that the game makes no pretense at any sort of real-life justification for its mechanics. Why don't you exit town with these buffs? Because you don't. You can't rest when you want to because the game only gives you a limited amount of firewood and there's no way to get more. In real life, of course, we can rest whenever we'd like.

And so it is in most  tabletop games. Finding time to rest is actually pretty easy- most games seem to proceed at a leisurely pace, and we all know about the "15 minute adventuring day". The only real way to avoid it is to either restrict access to time* or removing the limitation altogether.

In this situation, it's the difference between a class feature that lets you spend campfire time for a defensive bonus that lasts a couple of hours and a class feature that simply gives you and your party a static bonus all the time because you're assumed to be casting the ritual on any convenient downtime. 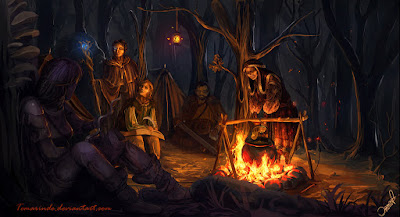 I actually started writing a little system that included campfire mechanics using D&D terminology. In this little thing, a short rest was now 1 campfire move long, and a long rest being 2. You could also decide to go into "downtime," which would let you basically do as many campfire actions as you thought wise. This downtime ties into cost-of-living, which means that the players need to have some sort of income. This is probably adventuring loot.

Anyways, the general idea is that you can tend people's wounds if you need to, which is assumed to sort of be the D&D standard. If you're not doing that, then you might be doing something in the game world- standing watch, studying something

More on that later, probably. This post is almost as much of a brainstorming session as the original!