You finally spot your quarry- the dozen orcs that have set fire to your village and slew all of your friends. There couldn't have been more than twelve of them, but they were battle-hardened warriors where your fellow villagers were mostly farmers and their wives and children, and they put them all to the sword. None of them died. They stole everything of value, killed and cooked what livestock hadn't run, and left, singing songs in their strange tongue, mindless of the blood and gore that caked in their thick hair and in their armor.

You'd tracked them over the past day; not a difficult task, since they were obviously making no effort to hide or keep secret what they'd done. They marched at a quick pace, despite being obviously burdened with heavy armor and their huge, spiked weapons, and talked and chattered amongst themselves the whole time. Now that they've camped, they'd taken off their armor and they huddled around a single campfire, yapping at each other and wrestling among themselves, almost rolling into the fire once. They all laughed at that, but you watched in horror. These were the orcs that slew your village? Not a day ago they killed dozens of your kinfolk and now they were rolling around in the grass and making obscene gestures at each other?

One of them, the largest one, snapped a command and the other orcs visibly sunk. Here was the boss of the warband. You had a tiny dagger that the orcs had deigned to steal, and it seemed useless against the scarred hulk that towered more than twenty feet from you currently stood. The huge orc had no helmet, and you could see that he was missing an eye. He glared out from his empty socket at the others, and cuffed one on the head. He spoke several sharp words, and then gestured at the sky. The orcs quieted and calmed down, and eventually they all went to sleep.

You were still standing there. What on earth were you going to do? 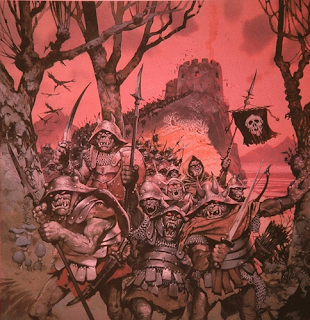 In Dungeon World, Orcs are savage, bloodthirsty and hateful. They all swear fealty to a chief, and they are all trained to fight. Some of them are berserkers, transported to near-insanity during battle because of their demonic rites. Some of them are priests, who pluck out their own eye as a sign of devotion and make pacts with their gods for vengeance. Some of them are shamans, who talk to spirits. And some of them are slavers, who roam the seas looking to shanghai a crew or two. This is all directly from Dungeon World's writeups of the race, and is taken for absolute truth.

But is it? How much is exaggerated by terrified enemies, or disgusted onlookers? And most importantly- what can we infer from these descriptions?

Well, a lot, actually. Nearly everything you could want to know about a people is there, actually. Funny how that works, isn't it? So let's start with the basics and extrapolate where we can.


If we take them at face value, we have a people who are pious, angry, and ready for battle, which we can clearly see from their aggressive disposition, their numerous warriors, their willingness to fight, and the central place that their shamans and priests hold in their society. This is the basic facet of orkiness- a sort of aggressiveness mixed with religiosity.

Each of these things tells a story about who orcs are, where they came from, and what they're like as individuals.

Ready for a Fight


Let's start with the most obvious facet of "orcishness," their combativeness. If every orc is taught to fight, then we can assume they have a strong martial tradition. Martial traditions occur only in societies with frequent low-intensity warfare, like Ancient Greece, Gaul, Mesopotamia, or Imperial China. In order for this to happen, the landscape must be of a type that supports at least city-states, and either large enough that a centralized government is difficult to administer efficiently, or dispersed enough that centralization is impractical entirely.

Both kinds share key features; in the absence of a centralized government, there are no kings to moderate in-fighting and direct their population growth towards an external enemy, there is no ethnic kinship (despite seeming similarities in language, appearance, and customs) so they remain free game to be enslaved or pillaged, and there are numerous feuds and rivalries with any neighbor, so that there is a kaleidoscopic web of temporary allies, potential enemies, and chains of atrocities committed on both sides.


This all, of  course, necessitates that there are cities, or at least permanent settlements, both because tribal nomads don't produce iron goods that orcs are known to possess, and because nomads generally do not have strong martial traditions, which orcs are again known to possess. This actually completely gels with their being described as hordes, because the peoples that have been historically referred to as hordes (i.e. the Roman's "barbarians" and the Mongolian Empire's "hordes" that enveloped swaths of Eurasia). Both of these people actually had complex societies with some fairly large cities (including the "barbarian" cities of Orleans, Bourges, and Chartres, which still exist today), trade routes, non-food producing specialists, a priestly class, and various other trappings of civilization.

So we've decided that they obviously have squabbling city-states, that they may or may not have had experiments in feudalism, and that they are very obviously possessed of at least a couple of disparate ethnic groups that fought constantly, leading to the establishment of a "warrior culture." This leaves us a couple of useful seeds you can use in your next game, including peaceful orcish cities, orcish ruins, and orc traders. Or possibly an ancient orcish battleground, or an orcish tomb of an ancient emperor.


Next up, we have their religion. Their religion is explained by three entries in Dungeon World- one of them being the Berserker, who undergoes a "kind of twisted knighthood" called Anointing By The Night's Blood, which turns a normal warrior-orc into a half-mad warrior whose madness never really ceases. This mirrors the real-life view of the Nordic berserkers, whose enemies believed that they looted, pillaged, and destroyed constantly in their horrible heretical frenzy. Of course, this isn't true- in real life, berserkers were highly valued and completely sane outside of battle, and even formed a regular part of armies and the personal guard of kings. But we do, undoubtedly, have a sort of holy warrior here. Can you say paladins?

Secondly, their religion is described in the entry on the Orc One-Eye, where a lengthy prayer of vengeance is delivered to one "Gor-sha-thak, the Iron Gallows," praying for vengeance against an unnamed foe, invoking the powers of night, of runes, and of the clouded sky. This, again, sounds fairly nordic; runes, blood magic, and one-eyed gods being a notable part of the Norse pagan worldview.

Lastly, you have the entry on the Shadowhunter, who is literally a holy order of assassins. They serve He of Riven Sight, the one-eyed god, and use poisons and shadowy magic to kill people that the orcs deem unworthy. This tells us a whole lot about orcs, once again- namely that there is enough left of orcish society to support not only a priestly caste, but to have holy assassins. This implies a high degree of organization, of information about other societies, and of frequent stretches of peace. After all, you don't send assassins to kill people that you're attacking- you send in assassins when they're not expecting it. This puts a wrinkle in the nordic theme, of course, and lends a sort of ancient middle-eastern paganism in. Which is kind of neat- now we've got a bit of interplay with lunar symbolism, the shadows of night, and a bit of the vengeance pokes through once again.

So when you put it together, what have you got?

Who's The Tusked Dude Over There?


A people who willingly meet their enemies in battle with no qualms for "fairness" or "honor," watched over by one-eyed sky gods hungry for sacrifice and for rivers of blood, who sail the oceans in their reaving ships, pillaging and plundering the cities of their foe-men, led by priests and berserkers anointed by night, commanded by chieftans' force of will and strength of personality in a de-centralized world of city-states and feudalism.

From this, we can extrapolate that orcs are independent, pious, and unafraid of personal sacrifice. They value personal accomplishment and do not acknowledge inherited prestige or positions, although they're not stupid and won't do things like disrespecting a king in his own castle, surrounded by guards. An orc makes friends and enemies easily, and has little to no truck with stupid notions like honor. To the victor goes the spoils, says the orc, and if the gods didn't like betrayal and backstabbing maybe they should do something about it. They tend to act rather than think. They talk with their hands and are vivacious. Their language is harsh and fast-paced, and tends to be made of compound words rather than unique words for each thing. A troll would be an uglywartmonster, and an dragon would be flyingfirelizard, for example.

Want to play them yet? Me, too. But I haven't written the rules just yet. Maybe check back tomorrow?