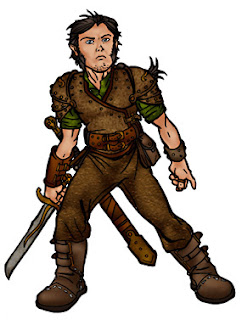 I would like to dedicate this post to Bartleby, the half-dead halfling warrior who was very nearly slain in a courageous and heroic duel to the death with skeleton champion Siggurd Broadson, known in life as a masterful and honorable fighter.

He probably could have made it if he hadn't had to swing a burning bookshelf at an ice giant lich. Or if he hadn't been beaten at by the same, or nearly extinguished wholesale by death magics.

Let me tell you about the game.

The adventurers stand at 4; Dirk the thief, Aziz the druid, Bartleby the halfling fighter, and Baldric the Bard. They had set out to the Ice Giants' Tower for reasons of completely petty larceny and looting, and found, instead, a complex filled to the brim with skeletal guardians, angry and petty ice giants, and heroes of distant legends past.

In this week's exploits, they ventured deeper into the tower, and discovered, unlike the bare and stony upper levels, a cushioned, carpeted, and comfortable sanctum, complete with dresser, chest, and numerous stocked bookshelves. In the middle of the room stood a pedestal topped with a crystal skull. A staircase led onwards and downwards, the brother to the one which they entered the room with.

The halfling and the bard went to the dresser and pulled open the shelves. The bottom one had luxuriant and beautiful robes, which the halfling mangled into a suit of clothes and a turban, since the last battle against the mimic left him without armor or much other than the underwear he'd had. The bard tossed the giant's staff to the druid, who caught it without much enthusiasm.

The second drawer had the giant's ignored and disgusting socks, which were growing edible mushrooms somehow. A thriving ecosystem of insects and small rodents were present.

I don't remember what's in the top drawer, but I do remember what was in the chest and in the secret shelf the thief spotted on the bookshelf: A thorny and enormous crown of silvered metal, and a golden goblet that the ghost in the thief's head helpfully informed him was used in the blood magical rituals. 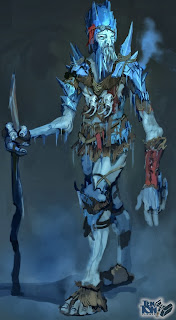 The crystal skull was found to speak, annoyingly, and make grand and loud proclamations. Everything, from crown to mushrooms to coinage found its way into the thief's sack. They were in the middle of covering their loot in books and piling it into the chest when the owner of said treasures walked in. An ice giant lich! He shouted in indignation for his staff from the diminuitive thieves. For lack of anything better to do, they threw it at him. He caught it and blasted horrible death magic. Yeah, he was pretty mad. Dirk's ghost screamed that it was Geiknir the Thrice-Dead and the bard recalled some fairly interesting facts. I'll write them in more detail later.

They fought him with moderate success, taking a few lumps and giving out a few in return, and snapping the giant staff in half, until the druid decided to attempt to ignite the ice giant. He misthrew the torch, and lit the carpet on fire instead, which spread to the bookshelves and threatened to engulf the entire room.

The thief fled, and the druid attempted to change shape, but failed, and stood in the middle of the fire and did nothing. The bard abandoned his musical stylings and tackled the wizard, which let the halfling fighter chop the hand that was swinging towards the druid, who had shifted into a bear and charged. I'm omitting some of the fight for the sake of brevity, you understand. There was also a burning bookshelf bludgeoning and some entertaining songs. And a thrown knife or two?

Geiknir teleported away, and the party decided to pursue down the only unexplored avenue, only to be stopped by a squad of skeletons, standing in formation, led by a singular skeleton with a large sword, a golden helmet, and a gilded breastplate. Bartleby immediately challenged him to a battle, an honorable duel, in hopes of slaying their leader before the battle properly began.

The skeleton revealed himself to be the twice-killed Seiggir Brodson, a famous warrior that the bard had sung songs about, but the halfling was stuck. The duel ended poorly for him- after a couple of slashes, the skeleton pressed his advantage and slew the halfling, who hung onto life with the faintest of threads. They recovered their dead, as is the custom after a duel, and the party fled up the giant stairs back into the sanctum.

It was no use, though- the lich was there, and demanded the other half of his staff back. The thief discerned that it was a ruse, and that the skeletons were back! A retreating melee ensued, but Bartleby and Dirk were captured by the skeletons while Baldric and Aziz fled. A single headbutt from Bartleby, in defiance of Seiggir's mocking taunt shocked the skeletons, and both of the heroes lept into action and smashed the head of Seiggir. The rest of the undead collapsed in a heap, no longer bound to serve a slain master, and the heroes quickly scooped up the loot and high-tailed it the fuck out of there.

Nevalix is the closest settlement, as a town built around a keep on the border of civilization. The populace is mostly military, merchants, and the families of guardsmen, but they're friendly and helpful and happy and have a good life. They dispersed- Bartleby found a halfling cook named Tark Haverngton and fell to discussing mushrooms and the delights of home. Baldric is in the company of Lord Anaster, who recognized the bard on sight and offered his home to the vagabond bagpipist. The Druid went to seal his pact with Death itself, and preyed upon a young wandering couple while disguised as a great albino wolf.

Dirk, on the other hand, proceeded directly to the nearest temple, that of Shaunra-thom, and asked for a quick exorcism. An immensely fat priest helped him, but the ghost was absolutely not happy when he heard what Dirk had planned. Too bad for him. At least, for now...

They secured passage south on a returning supply wagon from the ancient and bizarre quartermaster, who essentially said that if it's just them then they can hop on wherever there's space because the wagon's going south with or without them, so they got their stuff ready, found a nice and neat flophouse to snooze on for free, and prepared to figure out how they were going to turn their loot into piles of gold.

And that was the second session of what was planned to be a one-shot but just can't seem to end. Not that I mind, though, because the game is brilliant and fast-paced and creative as hell, and it feels like no matter how much I play of it, I want to see more happen.