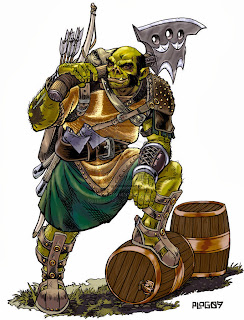 The coolest and best thing about Orcs is that they are completely unlike any existing human society. It's the reason that I wrote so much about them the other day (here); because they haven't quite managed to be relegated to a single human subculture yet, Blizzard's strange stereotypically vague Native American attempts notwithstanding.

They are part Ancient Greek city-states, part Polynesian seafaring raiders, part Mesopotamian god-kings, part Gallic warrior caste, and uniquely their own thing. Their depictions are often negative, but they're often portrayed as the enemy, even in Dungeon World. I said, why not let me play as Orcs and experience the world from the other side?

So let's do that.

When you expose yourself to an enemy's attack as a result of using Hack and Slash, take +1 forward against that enemy.


The Fighter, I think, feels pretty good thematically because when he gets himself into extra trouble, he's going to be a little more effective. It also means that the orc fighter is going to try and hack and slash a little more, and doesn't really mind if he rolls low because hey, at least he gets a better roll next try. Hopefully it works out like that in play. It should be exciting, anyways.

Whenever you travel to a city with a substantial orcish population, you gain a hireling that will follow you for free. This hireling will still make demands, as normal. The GM will decide on its loyalty and stats, as usual.


The Cleric, being that they are really the leaders of the orcs despite the warchiefs gallivanting about and pillaging their enemies, really needed something to get that across. Being able to demand service when at an orcish settlement is flavorful, fun, and appropriate, given their status in society. "You there! Attend to me! I am the chosen of Gorlagok, the Chained One!"

Your animal companion has +1 Ferocity.


The Ranger was easy- I want the orc's pet to be this big slavering thing, trained to kill. Giving it bonus ferocity lets the orc have this really deadly pet without forcing the player to give up a more cunning pet. Bonus Ferocity is pretty strong, but it really is only +1 damage, and a Halfling Thief gets twice as much when attacking at range. What I'm really worried about is that this is less exciting than the other racial Ranger powers, but you know what? I think that to the right person, this is good enough.


The Paladin was kind of difficult- an orcish paladin is really more of a divine battle-rager than a regular paladin, who is this sort of tough defender guy. This is really more of an issue of theming, but it's still difficult to think of something that'll make you want to charge directly into the battle. When you soften the penalties of defending a little, you end up with an orc that's actively making trouble, even when they're trying to help.

You choose two poisons instead of one for your Poisoner move.


I really like the idea of a temple assassin, but I don't think that every orc necessarily has a divine pact with his god. Instead, you have to consider what makes an orc thief different than his counterparts. To be totally honest I have no idea what that'd be so, instead, I went back to the old D&D standby of half-orc assassins and decided that extra poisons would be appropriate. I'm not sure if it's too strong; it's a weaker combination of Brewer and Envenom, given that those feats let you make literally any poison you've ever used, and use them safely after the first time. But it feels right and, damn it, that's what matters.