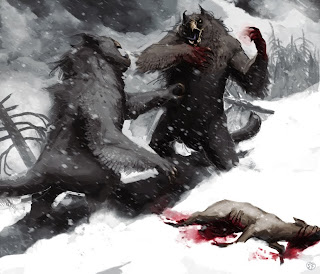 At the risk of sounding a bit like a crazy person I want to just go ahead and say that playing it was like a dream come true. It was a bit like a really great pair of underwear- it's got support where you need it, it mostly stays out of the way, and it doesn't look terrible, either.

The best idea, I think, is that each players' action has the potential to really make things worse, so you often have situations that quickly snowball out of control. I really do mean snowball; shit gets crazy quick.

As a good example, the first thing my players' party did was decide that they're going to a frigid arctic dungeon, deep in the north. I had them roll to make a Perilous Journey, and so they did. The quartermaster, to whom the food supplies belong (a halfling who immediately demanded that he be quartermaster as soon as he found out what that was, no less), rolled fine, so nothing happened to their food. The trailblazer, not so much- he rolled a 7. I asked him what was up, and he told me: "Oh, the map was upside down!" We decided that they'd have to eat an extra ration, since they were headed exactly the wrong way and wasted a lot of what would normally be productive travel time. But it got interesting with the scout, who rolled really, really poorly. I offered him a hard choice- you can either stand your ground here, and try and outsmart, outfight, or otherwise trick it (not entirely unlikely, since the scout was a bard,) or you can run for your life and hope that your party helps you deal with it. He chose to run for his life, and I told him what was chasing him: An enormous, slavering yeti.

And so, without any preparation or forethought to what was happening, we have a clear picture of the party; a somewhat oblivious but well-meaning bard, a possibly sheltered thief, and a halfling who is more concerned with the food than with where they're going.

I can't remember how the fight went, but I do remember that they ended up getting some help from the Druid (the last party member, who according to the Bonds that they wrote before the session, actually knew most of them from before), and they dispatch the Yeti, but not before the bard's music attracts more of the beasts. I left one of the failed song attempts hanging, because I'd had a plan for later...

Anyways, they run into a nearby ice cave (they used Spout Lore to decide that there were some caves nearby, I think,) and the thief uses his powers to detect traps, asking if it's safe. It isn't- the bard's bagpipe music has weakened the ice and it's going to collapse! But the Druid runs deeper into the cave (a result of a failed attempt to aid, I think)!

The entire session goes on just like this, with two steps back to every three steps forwards. It was like a roller-coaster ride, and I highly recommend Dungeon World to anybody who's tired of preparing game material and just wants to play a really fun, really exciting fantasy game.