I keep meaning to actually post something that I'm working on, but the only thing I've been doing the past couple of days (besides scouring the internet for people looking for a freelance writer, but hey, that doesn't count) is playing Mount and Blade. 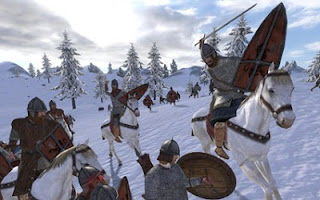 You start out as a lowly, no-good adventurer in one of several kingdoms based on real-life cultures. It's up to you to figure out what you're going to do to go from random guy on the street to mighty warlord. Or a vassal to a king. Or a mercenary. Or a merchant.

It's a lot of fun, not the least of which because when it's time to put your enemies to the blade, it's you riding on horseback, commanding from the front, swinging swords and axes with wild abandon. The fighting system itself is precise and violent- you can parry attacks, batter shields down, slay the horses of your enemies. And most importantly, it's a lot of fun.

The only thing the game is missing is an ancient mod- they have mods set in world war 2, for some reason, and ones for slightly forwards in the time span, and naturally a half dozen roman mods. But nothing that lets me run around as Odysseus or Achilles, sadly.

But other than that, it's a lot of fun, and it's what's been consuming my time.