I downloaded Everquest the other night and have, so far, given it five or six hours of my time. I'm not sure if I like what I seem to have gotten myself into. Scratch that- I am certain that this game is not for me.

Let me talk about myself a little, first.

My first actual MMO, back in 2005, was World of Warcraft. I'd never been in one of those families who was happy with having their phone line tied up forever, so my gaming had before then been limited to what is now called hotseat play, or just single player gaming. But by 2005, wireless internet and affordable laptops finally entered my family's world. It was addicting and exciting. We didn't have to take turns at the computer anymore, or be frustrated by another family member's email duties, or epic stretches of Civilization (the family's game of choice for a long, long time), or anything else. We could all do our own thing, and so we all kind of did.

I can't remember how I first heard about private servers, or how I decided that World of Warcraft would be the game for me, but I do remember how for three days and three nights I left my laptop on (and slightly cracked) and hidden where it wouldn't be accidentally knocked closed. Finally, the game finished- finally, I installed and connected to the game.

Naturally, I invited my brother to play. We copied the files over (a laborious process for our laptops), and the two of us proceeded to spend our summer vacations duoing World of Warcraft, nearly alone, on a private server. We reached max level, started over on another server, and enjoyed (and, it must be said, sometimes hated) playing with other people. We experienced dungeons for the first time, and ganking. World PvP, city raids, chat-spamming, kill-stealing, auction houses, everything was brand new again and glorious. It was a fantastic time from the moment we began to the moment we finished. The different zones were always interesting and novel, the way it tied into a beloved IP was exhilarating, the class system was glorious. I remember saving for tens of levels to finally afford my own mount, a beautiful turquoise Raptor that, to this day, remains my mount of choice on those rare occasions when I see how World of Warcraft is doing. Playing through vanilla World of Warcraft remains one of my favorite gaming memories.

I mention this to highlight the difference between my early experiences with World of Warcraft and with Everquest, and to demonstrate that I really do enjoy MMOs. I'm not the kind of idiot to complain about a game I don't like in a genre I knew I didn't like. I went to Everquest expecting a sort of manic genius, a sort of unfocused brilliance that manifests itself in so many older games. You know, how the teams were smaller and had nothing to lose, so they'd put all their best ideas in a game and hope to god it worked. I went to Everquest expecting an old-school fun. So far, I am vastly disappointed.


Now look. I did do the research- I am armed with various wikis, guides to levelling, and well-documented forays into pretty much everything. Everything pointed towards a game of grinding your way to 60 through a hostile world that will not hesitate to kill you, steal your XP, and lose all your items. Now, I am not the type of person to object to grinding- I did play vanilla World of Warcraft as a two-man group. We essentially just ground out the levels for a period of a week or so, and it was enjoyable enough. I'm not the kind of guy who objects to death penalties, either; I love roguelikes and will continue until the day I die. But Everquest is the worst of both worlds- it has the uninteresting combat of a roguelike without that game's expansiveness, and a grind treadmill without any satisfaction whatsoever.

God damn it, look- I've gotten lost in the maze-like and hideous city of Freeport for an hour while I use an out-of-game map to try and find my bearings. I've slain at least a dozen bats, skeletons, and rats and found that my hour's worth of effort isn't even enough to buy me a new dagger. I clutch my stack of bronze coins (or are they brass?) and stare at the shopkeeper, wondering if there's something I'm missing, if there's some way to be able to afford something other than the default tunic and short sword. And while I'm doing that, I'm wondering if there's more to the game than standing there and waiting for my Warrior to autoattack skeletons, if there's more to the game than casting one or two spells as a Magician and waiting for the thing to die so I can take its loot. I'm wondering if, as it seriously is sounding, if the game is centered entirely around an unsatisfying, grinding combat system with no PvP and a hardcore raiding endgame. But there isn't. That's it. That's the game. You watch your fighter slap the enemy, without any input from you. And then on to the next one.

And this wouldn't be a problem, either, except that I am familiar with what the game is doing. I've been there before; this is not a mystery to me. This is a Skinner box dressed up in blocky dwarves and elves, hiding behind the digital merchants and skeletons. I'm expected to hit the "autoattack" button, wait a couple seconds, and receive my prize. If I play with other people, I can hit the button faster, get more prizes, get more accomplished. It's the exact same mechanic as those awful Facebook games. Sure, it says, by yourself the game isn't that great, but if you get your friends to play you'll love it! You can talk to them while you game, and even roleplay if you want! This is simply not acceptable. I can see why people get sucked into it, the same way that people get sucked into Farmville, or Mafia Wars- you slowly will win. The only way to lose is not to play. Put in enough time, and you are guaranteed some great loot, piles of money, experience, everything. The game is open to you, if only you would try more. And for some people that's seductive.

But I am a snob about one thing, and that's gameplay. And I'm sorry, Everquest, but the passage of time has not been kind to you. There are games that do grind better, that do community better, that do grouping better, games that mock you, games that openly reveal the dirty secret that's kept some players glued to you for ten years. It's not the game, it's the community, the long-term players say. They just stay for their friends, their guild, for the socialization. I'm sorry, Everquest, but I came to you for a game, and your open secret is that you are only just barely passable as one. 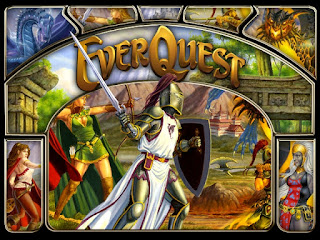 I'm sorry, Everquest. I tried. I really did. But you, my friend, are kind of terrible.