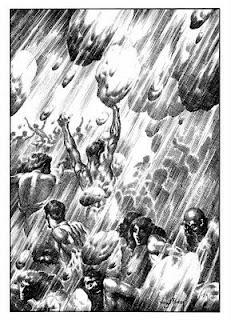 To say I've been working hard on my game is an understatement. It's a conglomeration of all the house-rules I've ever needed to implement, combined with the setting I've been wanting to make, combined with the flavor and themes that I paste onto every game that I play anyways. It's working on being my baby, and I don't care if nobody ever plays it but me, my brother, and my buddies.
Anyways, I'm putting a short preview up here, as much for the sake of looking back when it's over as much as because I want anybody to read it.
Points if you catch the references, btw.

Priests of Ormuzd
The servants of the god of fire, light, and the sun that represents all that is holy, pure, and clean. They are devout, honest, and helpful, although they tend to be narrow-minded, haughty, and blunt. To the priests of the True God, there can be no deviation from his worship. Of course, practices are likely to vary widely across the lands, as there is no central church, enforced beliefs, or the like. The cult of Ormuzd is loose and personal, with each member either having a personal support for the Undying Flame or none at all, and which is which being up to the worshipper himself.

The priests of Ormuzd frequently employ both fire and water in their rituals, beleiving that both fire and water are necessary for life and for wisdom. They always pray in the presence of some sort of fire or light, as it is the medium in which spiritual wisdom and purity is gained. Water is considered the source of this wisdom.

Their magic employs shadow and cold, as they are the opposites of the burning wisdom of Ormuzd. They also employ the decaying bodies of the freshly dead, as this is in itself a corruption of the natural order of things.
By Nick - February 26, 2010