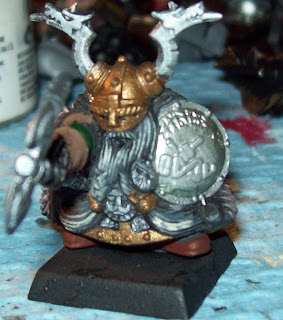 The army of Karak-Dal-Zharr marches to war. From deep within the dormant volcano they call their home, they spill onto the forests. The greenskin threat has grown to be more than they can bear- their rangers, highly skilled warriors and scouts all, tell their Thane of the movements of a goblin warband of no small size. Their raiding parties through the Empire's forests have gotten them to the stony gates of the Thane Bormin Truthseeker. His warriors, brightly clad in shining chainmail and aeon's old dragon's gold, have been preparing themselves for days, the veterans and longbears telling the young beardlings tales of their ancestor's greatness, the severity of their grudges, their coming victory. They are ready for the threat. They are ready for the war.

I've managed to paint up a fairly small warband of Dwarves, which I've decided are from Karak Dal Zharr, a mountain stronghold (when isn't it?) that's near an old forest. There are greenskins in the nearby forest, as well as beastmen and some human settlements. The Dal Zharr are painted in one of a couple of ways. The dwarf rangers, scouts, and foresters, as well as their conventional army support, are all wearing green, brown, and their metals tend to be silver, with older and more experienced warriors wearing golds. The Dal Zharr dwarves tend towards stealth and subtlety, as opposed to many dwarf holds' stand and fight philosophy. Of course, being dwarves, this usually means that they'll field only one cannon instead of three, and that dwarves will spring from their ambush positions and hidden flankers as soon as possible, so to be able to wade into the fray and avenge their long-held grudges.