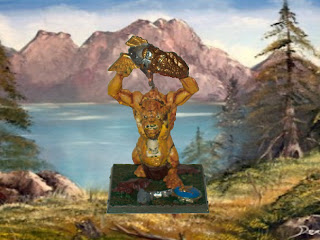 There were always reports of trolls. Like the greenskins they smelled like, trolls were reported to be in every cave, every forest, every nook and every cranny. Garaz Bakazi, or Seymour as he'd been known to the humans he'd stumbled across, had almost given up hope. The accursed things were almost impossible to find, even after weeks of scouring the wilds, searching for broken trees, devoured animals, and the like. Seymour decided to head for the lake to wash the sweat off of himself- though he'd long since forsaken any other form of comfort, if the troll smelled his sweat, he might flee. He stopped by the river when he saw an enormous yellow beast, hefting an enormous chunk of grudge wall over his head for some reason. Seymour grinned. It was a good day to die.

This is the troll my girlfriend painted. It's a cool story, actually, and I believe it's one of the first figures she painted. She got into it, painting with her hands and changing his colors at least twice before she was satisfied.

I tried being helpful and pointed out how they'd painted him on the internet- she declared that was "too boring" and continued on her way, painting him this color and that, before settling on the most hideous shade of yellow she could find. I asked her about it, and she declared that "He's a troll, right? Trolls are supposed to be ugly!"