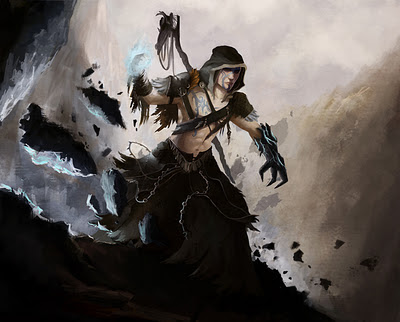 Part of the thing I'm trying to do with Skeleton Puncher is keep the traditional fantasy theme going strong, while streamlining and simplifying a lot of the mechanical side of things. A lot of the complexity that's come out of these systems is due to trying to "keep the same system but add more stuff" that gets us bloated rules messes like 3e and 4e, instead of actually serving some sort of purpose to the system.

This is relevant, because one of the messiest systems in any game is the magic. It's important to keep it a little complex, to allow for cool emergent gameplay and solutions you didn't think of, as well as to keep the feeling of magic being a little overwhelming for your characters. If there's this many moving parts and it's just a game to you, it feels a little more dangerous and mysterious than just using "Magic Points" to cast "Fire Blast 1".


So anyways, I was thinking about using a magic system for Skeleton Puncher where you bind the four classical elements to your chakras. For the uninitiated, I plan on using a very basic form of my understanding of the chakra theories, where there are 7 chakras, that open in order from lowest to highest, and each one has a different location on the body (that I'm going to more or less ignore, except for vague location types), and a different potency. That is, you have to open them in order, so opening your top-most chakra (the "crown chakra") is the epitome of a very enlightened person.

And this is what I want. As a spellcaster, you open your chakras as you advance in Rank. This gives you a small benefit related to the nature of the chakra (such as wizard's eye upon opening your 6th, or "brow" chakra, typically symbolising the third eye), as well as allows you another place to "bind" your elements.

Each bound element lets you access the next "tier" of the elemental magic you can access, and also allows you to mix and match elements, sort of. For example, if you have two fire and one air chakra, you can cast 2nd tier fire spells and 1st tier air spells, as well as maybe some sort of fire+air spell (although I'm not sure what that'd even be, I'd have to think about it more).