Magic and You: Campaign Settings 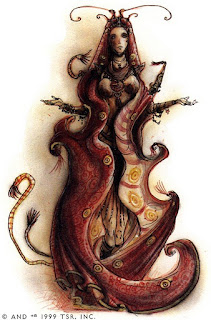 I talk about magic way too much, and it remains a thorn in my side. In large part, it's because I can't just "let it go" and wave away all the complications that magic brings- I'm really too much of a Gygaxian naturalist to let something as potentially interesting as the actual effects that magic would have on a society to do what 3e (and probably other editions) did when they had a world full of magic users, and yet there are still castles and catapults and other things that would be rendered obsolete by even a single 5th level wizard.

In games where magic is Common, everybody knows about magic. Society tends to move along a relatively sophisticated axis, and many things are dealt with exclusively by magic. The effect it has on society generally depends on the size of the difference between powerful and weak magic users, and the strength of magic itself. In settings where there is a great size difference, you may have a merit-based oligarchy, where the strongest magicians "naturally" rule the less magically talented, or you may have a rigid caste-based system revolving around how much magic a certain individual has, with magical aptitude flowing through families- a a sort of "Divine Right" magically realized. In settings with a smaller difference, society generally continues apace although, again, it depends on how strong the magic is.

In games where magic is Rare, many people might not even believe in magic, since they're unlikely to see it. Wizards and witches are either objects of fear and veneration (if magic is Strong), or folklore heroes like any other (if magic is Weak). Magic users are generally avoided due to superstitions or fear of their (likely greatly exaggerated) powers. In settings where magic is rare, wizards are unlikely to be seen in society in any great capacity, generally choosing to remain in seclusion. The scholar archetype is seen here in abundance, and player characters are unlikely to be able to select a magic using profession as their own. In settings where they can, the player is then able to wield a great amount of power, generally speaking.


In games where magic is both Common and Strong, look to Eberron as an example of a fantastically realized setting. Magical power is the currency of the world, and wizards have generally invented a higher standard of living than is found in most other societies. Warfare is extremely modern in settings where wizards have access to artillery-style settings. Massed formations are useless where a single fireball or lightning bolt will kill dozens. Conflict tends to take the form of espionage, sudden shifts in alliances, and backstabbing. For another great example, check out the 3rd edition DMGs. For all their inconsistent tone, they very often have surprising insights on what society looks like when there's a wizard around every corner... except when they pretend that it's medieval fantasy again.

In games where magic is Common and Weak, consider reading the Diskworld novels. There, magic is generally regarded lightly by the populace, if at all. More than likely, there are still powerful wizards and weak ones, but the difference is a linear one, instead of an exponential one- that is, a powerful wizard might be twice as mighty as an apprentice, but hardly ten times as powerful, or one hundred times so. It might be even more powerful, such as in the Xanth novels, where every single person has a minor magical power they can use for entertainment or for completing chores. Or every townsperson could know a handful of charms for cleaning, or keeping away sprites and goblins, or for keeping a fire lit. In this case, look up our own Real World! Whether it's people praying for minor miracles, or folk rituals, people in real life have traditionally tried to change the world with magic, with generally very minor results.

Where magic is Rare and Strong, you have a cold war situation. Wizards are easily the strongest humans around (if not some of the strongest beings), and they are easily capable of either forging their own kingdom or usurping one that exists. When magic users are frequently walking missile silos, or can raise armies of the dead to fight for them, or summon giants, they make the rules. They decide what goes on. If it doesn't happen in the game fiction, the game's default setting is deeply flawed. This sort of world is reflected in the Amber Diceless Roleplaying, or so I've heard, and it's also somewhat in effect in Ars Magica. There, wizards rule the world in name or in fact. In this sort of world, players are almost required to be wizards, as the world is subsequently divided into the haves (magical folks) and the have-nots (nonmagical folks.) Alternately, magic could be so rare that perhaps one man in a million will possess its secrets, meaning that the rare wizard that does manage to crop up is a major world-shaking event suitable only for non-player characters or perhaps a party that doesn't mind essentially being spectators to one man's rise to power.

Where magic is Rare and Weak, you have settings like that of Conan's Hyboria. Subtle wizards use their craft more than their magic, using misdirection and fear to enhance their powers. They are feared due to the legends they helped craft about their prowess. In such a world, players are not likely to be wizards any more than they are likely to be bakers- it isn't a particularly rewarding path until its pinnacle, and there, again, most of the wizard's power comes from subterfuge instead of magical might. It's got a very pulp-fantasy feel, where a group might team up to stop a particularly vicious wizard from recovering an mighty artifact. This is also the way magic in Warhammer Fantasy works, sort of- magic in Warhammer isn't weak, it's merely unreliable and unhelpful in most situations. A Warhammer wizard is a deadly force in a fight, when he has to be, but otherwise is generally unhelpful. You'll notice Warhammer also evokes a particularly pulpy feel, where the heroes are often anti-heroes and life is dirty and rough.


...this post was supposed to be a warmup, but it kind of took on a life of its own.