What I am about to say will not shock anybody who's gamed with me over the past, what, ten years? But I must press on.

I love low level play in Dungeons and Dragons. There! I said it!

Not for me are the bizarre tales of level 32 Fighters dual-wielding the Hammer of Thunderbolts and a +5 Sword of Dragon Slaying, tackling a squadron of githyanki pirates riding spider eaters, nor of level 25 Wizards reshaping the world as they see fit. There's nothing wrong with that game, of course, but it doesn't do it for me.

What I like are the tales of the little men. I have a copy of The Decameron, an interesting hodgepodge of stories told by a group of tale-spinners from the year 1348, full of tales of clever rogues, vengeance, and humor. The stories involve common men and women who find themselves in unusual situations and (generally) get the better of a more dull-witted rival through deception and cunning. It's a fascinating read, and extremely enjoyable. I recommend that you take a peek. It's worth every penny of the $7.95 I paid for it at Borders. Seriously. It's awesome.

It's the same way in roleplaying games. The story of how Napoleon conquered a good chunk of Europe is pretty interesting, and similarly with Alexander and Genghis Khan. Masterful conquerors, valiant warriors, and interesting people every one of them. But they're not interesting because they were powerful- what's interesting is what makes them tick.

For example, knowing that Alexander had an awful temper and was prone to hot-headedness is interesting- you can imagine what it'd be like to meet this warrior-king. We've all met fiery, passionate, driven people before, and we can relate. His megalomania and paranoia are interesting. Who hasn't felt like they ought to be the ruler of the known world? Who hasn't wondered if there aren't secret conspiracies amongst us? The fact that he conquered so much of the world is interesting, and the accounts of his battles are interesting, filled as they are with brilliant strategies and incredible insights. 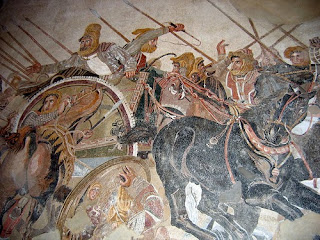 But you'll notice that this is all historical. This actually happened, with regular people. Interesting, larger-than-life people, yes. But regular people nonetheless. Genghis Khan didn't have to have a magical sword, enchanted greaves, or a wand of fireballs to ravage the world with his hordes. He did it by being smarter, meaner, and tougher than anybody around him.

And that's how D&D should play. You can be the roughest, toughest, meanest motherslapper in town. Cool. But you're still going to need to be smart to get ahead. You can't lean on your magical weapons, armor, scrolls, potions, and staves to carry you through. You can't plow through an army of level 1 soldiers, because they're "merely" wearing plate mail, mounted on mundane horses, and wielding "boring" lances. That's insane, and that's just not right.