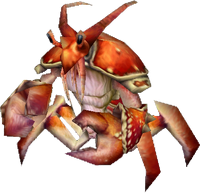 The Karkinos
An intelligent race of nearly man-sized crab creatures, measuring nearly ten feet from side to side and standing roughly six feet tall. They have two pincers where the hands would be on humans. Their left pincer is small, longer, and more dextrous, but their right pincer is larger, tougher, and more powerful. When fighting they tend to use either attempt to grab their foe with their larger pincer and tear at their soft bits with the smaller, or use the larger pincer as a shield and the smaller as a sort of dagger or spear.

Karkinos, or Crab-Men as they are commonly named, tend to congregate around harbors and wharves, attracted by the cast-off, rotten fish, as well as the barnacles, algae, and seaweed. They also enjoy the activity of human life, which they are intensely interested in. They are content to merely observe, however, as they cannot meaningfully interact with humanity- they are unable to speak, and are able only to make broad gestures and hope they can be understood.

Scholars have determined that the Karkinos language is nonverbal language, consisting of pincer waving, eyestalk wiggling, leg shuffling, and mandible waving. It is therefore unable to be utilized by humans, who lack most of the necessary appendages. Attempts to communicate using human emulations of their language has been a universal failure. It has a written language, oddly enough, which is generally carved using the tough mandibles of the crab-men. It, too, is entirely alien and remains that way despite the best attempts of academics.


Crab-Men are almost entirely passive with humans, and there have been cases where Karkinos have dragged the bodies of shipwrecked sailors onto land, only to disappear again before the sailors can mouth their gratitude. Some sailors claim to have seen the Crab-Men cities and claim that they are made of coral and algae, while others maintain that they are made of enormous slabs of stone. No reputable source has been able to verify if the intelligent Karkinos have cities or if they live a nomadic lifestyle, and no Karkinos has seen fit to answer either way.
By Nick - October 22, 2010

Email ThisBlogThis!Share to TwitterShare to FacebookShare to Pinterest
Labels: creativity