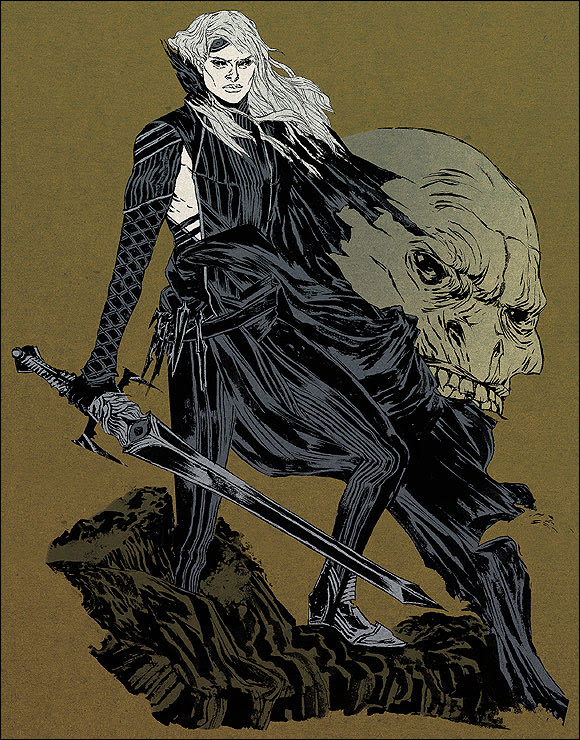 This image isn't at all related to this next post, but I like it a lot. The colors and the composition are really cool, and there's something about it that makes it greater than the sum of its parts. Not that the Elric / Giant Floating Skill combination isn't really, really cool, but just that it has a certain kind of charm. If you like the art style, feel free to check out Ming Doyle's site, it's chock full of coolness.

There's two reasons for the recent dearth of posts:

1) The author managed to snag himself a nice stomach bug, source unknown. No details, as they're not particularly nice, nor relevant to gaming in general or this blog in specific.

2) The author's been working on a retro old-school platformer with his buddies for a competition on The Independent Games Source, for the A Game By Its Cover competition. Lines of pseudo-code have been running through the author's brains for the last week, and it's hard to turn off the exact, mathematical side and change gears into the abstract writerly side lately.

But regardless, here's something really interesting: a forum post detailing another man's quest to retool the schools of magic. I've long felt that the magic as written needed work, but haven't given a single thought as to simply adjusting it. Here's a snippet, followed by the link:

The schools of magic in 2e DnD are arranged as follows in the PHB:

What can we say about this arrangement? Well, it seems natural enough that Altering things is opposite of Protecting (Abjuring) things (presumably they are being protected from being altered). Evocation also seems to be direct and brutal while Enchantment seems to represent subtle manipulations, so that is a fairly natural opposition.

But Divination and Conjuration? WTF?!? I mean, isn't most of divination about asking questions to stuff on other planes? While Illusion and Necromancy aren't as obviously mis-opposed, there isn't a lot of reason to oppose them either: I mean are you seriously arguing fake stuff is the opposite of dead stuff?

Some of the bordering schools make sense too. Illusions and enchantment both seem to do mind stuff. Conjurers are typically depicted conjuring whilst inside a circle of protection. Evocation and Necromancy seem to share some direct damage causing flavored effects.

But Alteration and Divination? Evocation and Divination? So blowing up stuff and changing stuff is next to knowing about stuff? Cause invokers are so subtle and inquisitive right? Yeah... And Necromancy next to Abjuration? WTF? And while it might be convenient for a conjurer to also just charm whatever he summons, what is the RP reason that these are related magic processes?

It's yet another post that really shows what kind of intellects are at work in the fantasy sphere. It's enough to make an average blog author feel quite... insignificant.
By Nick - July 03, 2010