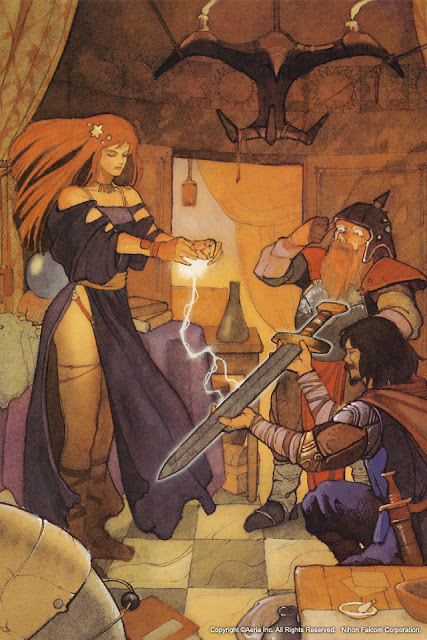 now, I personally like to sort of create the world with my group of players, when we're first starting the campaign, which means it's usually pretty easy to get players interested in the people and places of the world when they had a hand in it.

but sometimes, somebody joins later into the game, or they need a replacement character for one that dies, or maybe they just don't like helping to build the world. it's all good, honestly. in those cases, you still need them to hook into the world somehow.

something I'm thinking of doing for player characters going forwards is asking them to write, like, two things that their character wants that they can't have, and why they can't have it. write it on the front of the character sheet, maybe taking up space where they were supposed to write their gear or whatever. someplace front and center.


the things that a character wants but can't have are the fundamental core of the character, from a dramatic standpoint. it's less important that Hamlet is a Danish prince than the fact that he wants to kill his dad's ghost. or whatever. when Tom Hanks is playing hide and seek in an airport, it's less important the name of the country he's from and more important that he wants to go home and he can't because of legalistic mumbo jumbo. and on a smaller scale, the fact that he has to survive in an airport that he's not supposed to be living in. once those things are resolved, well, the movie's over because they're not doing the Saga of Tom Hanks' Character (whatever it's named), but you can assume that if he were to go home he'd have a whole host of other issues, too, like 'he wants to get a job but he doesn't have paperwork proving his citizenship anymore,' and 'his family's been displaced by the civil war.' or whatever.

point being, that's how you get the character involved in the world. it gives the player a chance to declare what they think would be interesting to explore with their character. a dude who wants to play a bloodthirsty barbarian is going to write 'wants to slay the chieftan of Rival Clan but he can't because the chieftan is mighty warrior protected by a magic amulet' or whatever. or how their son was slain by a goblin tribe and he's sworn vengeance against them and won't rest until they've been annihilated.

some guy who wants to play a diplomatic game might want to be nobility but can't because he's lowborn, or his family was disgraced, or whatever. somebody who'd like to have a redemption arc might be like 'my character did Heinous Deed and wants to atone.' and then you maybe figure out how they atone later, if it's ever interesting.

if it's not interesting, you can talk to the player and be like 'hey I notice the thing you wrote isn't coming up in play, do you still want to deal with that or should we work on something else that your character wants?' and both answers are fine. in a tabletop game, you have to share spotlights and people have to have their issues dealt with as they come up in the game. and sometimes it's not the right moment. the point is, it lets the players help direct your attention to things that they might find compelling, and a good game runner / DM should seek that input frequently.