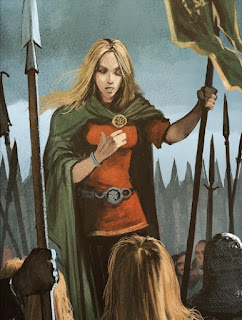 I dissolved my 5e group over the weekend. (1)

In its place, I want to run The One Ring.

Now, I'm not the biggest Tolkien buff in the world- but I have watched the old Rankin-Bass Hobbit movie so many times that I've memorized all of the songs. I obsessed over Peter Jackon's movies when they came out, and have had discussions over what, exactly, the Uruk-Hai are. I have an opinion on Feanor and on Elrond.

I've been reading Njal's Saga, as well, and if there's any way to emulate old Germanic / Norse sagas, it's with The One Ring. In those tales, some men were highly regarded warriors. Some were skilled craftsmen, wise judges, or learned scholars. None were considered lowly, except the craven or the dishonorable.

In The One Ring, you might not have any real combat capabilities, but that's absolutely fine because even the warriors don't really want to fight. And most characters have some combat skill anyways- it is not uncommon for Dwarfs or Woodmen to have to defend their homes, and spears aren't that different from pitchforks anyways. An axe is both a tool and a weapon. 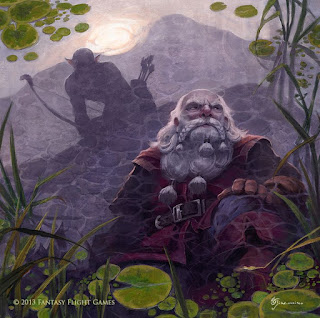 But every character's got mostly non-combat skills, too. Dwarves are generally good at crafting, and singing. The hobbit is great at diplomacy, sneaking, and riddles. The Woodsman is a sharp healer and can ready body language. These skills take up most of the space on your character sheet- there are 18 of them, and every character has a handful, and gain points in them when the skill succeeds or fails in a distinctive or memorable way. So you're encouraged, in-game to do interesting things with your abilities. It doesn't matter if you always pick locks- pick something interesting! You're a good singer but you can't be great until you do something truly daring- like charming an uruk-hai with your tunes! Your characters quickly become distinctive and memorable in a way that is actually unique to the player, which is just great.

Characters have both physical stamina and emotional resilience. They can lose Endurance by getting hurt, both in combat and out. Losing Endurance eventually makes you Weary, which is a status condition that doesn't go away until you take an extended rest. While you're Weary, your low results are simply discarded, so you're more likely to lose close rolls. You can lose Hope by picking up Shadow points, which you gain by interacting with nasty things in the game. You can gain Shadow points by witnessing carnage, by simply interacting with truly horrific sites (a necromancer's tomb, a massed army of orcs, that sort of thing,), or by simply being awful to people.

The more Shadow points you have, the worse things get for you. You picked your character's Shadow Weakness when you made the character: You chose in what way the stress of adventuring would bring them madness. And so when you have more Shadow than Hope, you become Miserable. When you're Miserable and roll the eye symbol on the dice, you suffer a bout of madness. (2)

When you're mad, you act out in the way that you chose that you would, but it's the GM doing it for a little while. And he's supposed to make things worse, or at least a little more tense.

You can spend Hope to get a bonus on your die rolls. You restore Hope by draining the party's shared Fellowship pool. This pool restocks when you're in the resting Fellowship Phase, but otherwise is mostly static. You can get Hope for free if everybody agrees you can, but if every single person doesn't agree then you have to spend Shadow to gain it. 1 point of Shadow for each point of Hope.

There are a lot of other interesting mechanics in the game, too. Traveling is its own special set of rules (called a Journey). There's a Fellowship phase where the adventurers are resting for a while while the players spend their points and decide what happens to them in their breaks.

It's a cool system, and I hope that I can find some good players to enjoy it with.


(1) It just wasn't working out- the players had no real cohesion or drive, and everybody was too laid back. The system is flabby in the only parts I cared about, and skeletal in the interesting parts. The game is mostly combat focused, but the combat is mostly uninteresting. The default setting is both bolted strongly on and extremely boring; it doesn't really correspond with any sort of fiction I've ever enjoyed, and there aren't really any stories to tell. I would have had to make my own 5e campaign setting, which wouldn't be so bad except that, again, the system isn't interested in the stories I have to tell. It cares about a party of warriors who overcome a series of violent encounters engaging in a level treadmill all the way up. I could write more about how I dislike this style of play, but I'll just leave it at that.