I've been working on a minor B/X heartbreaker as a personal project, you know the drill. It's a combination of my favorite house rules alongside some quality-of-life changes that makes the game easier to run at my table. You know, like every other one. But this one's mine! 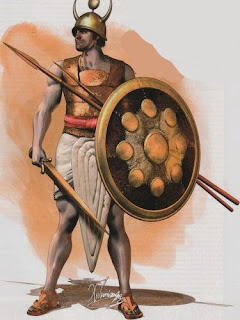 And one of the things I really want to do is deal with the bronze age. I mean cmon, look at this guy! If you don't want to play as that guy, you're nuts.

Part of this approach means taking some early D&Disms and giving them a more prominent place- "armor class" is the sum of your defensive equipment as usual, but helmets explicitly give armor class, and so do greaves, breastplates, and shields. A bronze-age warrior fully decked out in their panopoly should be pretty damn tough.

Morale has always been sort of a funky mechanic in D&D, and it's not really a surprise that it got abandoned by the time 3rd edition rolled around. [1] It just sort of sits there, the modifier never changes, and it's really a monster-only thing. You hit a monster- roll morale. The monster gets reduced to 1/4 health- roll morale. The group of enemies suffers a casualty- roll morale. It's too much.

Here's my solution: Everybody gets a morale score, from 2-12. That includes players. When you have to check morale, roll 2d6. Higher rolls are good.

There are a handful of times when you check morale: When you're reduced to half health or less, when your leader [2] is slain, or when half your group has stopped fighting (fled, dead, paralyzed, whatever).

If you pass the check, then nothing happens. You're doing alright, for the time being.

If you fail the check, then your Morale is reduced temporarily by 2, as the stresses of combat wear you down.  [3]

Morale feeds lightly into your attack and defense bonuses- the reason for this is to make the players, not the characters, afraid of trying to hang around a losing battle. "We gotta get out of here guys, I'm at 4 Morale! I can't fight like this!" [4]

This also lets me do something that I've always wanted to see represented in a game: Shouting matches. 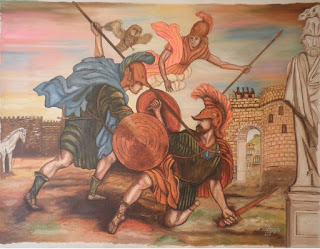 If you read heroic classics, like Beowulf, the Iliad, or certain Norse epics, you see that before a fight, champions would often meet to exchange words, insult each others' heritage, and call each other cowards. This is something I want to put in the game, and with Morale being an actual statistic, it's easy.

Just have an opposed Morale check. Both leaders add their Appearance bonus and their Charisma bonus. Lowest result suffers 1d6 Morale damage. That's it. If you refuse to send out a champion of some sort, if your leader refuses to meet in the middle, then it counts as an automatic loss. What kind of ragged army doesn't have a champion? What kind of cowardly fool won't meet his peer in combat?

Now that I think of it, there has to be some sort of "outclass" situation, where obviously the Pharoah of the Eternal Empire doesn't have to meet with the squabbling barbarian tribes' dirt-covered chieftan, but I'm not sure a hard-and-fast rule makes any sense in this situation. We're all smart people here. Use your best judgement.

The last thing that having a Morale score does is allow musicians to be an important part of the game. This deserves its own post, I think, so I'll deal with that later. Soon I'll write another post, detailing either music, Appearance scores, or else possibly just the way that equipment is going to work.

[2] Typically controlled by a character's Appearance bonus, which is another rule that I'm going to add, because it again guides players towards emulating the right style of play- you should be spending money to gild your helmet, purchase gemmed swords, and acquiring purple capes because it looks cool, and because it ties into your personal Morale bonus, which makes you fight more effectively.

[3] 2 just feels right, and means that if an average untrained human being has 6 morale, that half of them will flee when the leader is killed, and then most of the rest will turn tail and run after the remainder is chopped down. This feels about accurate to me- in these times, generals were also soldiers, and were expected to charge into battle, protected by elite bodyguards. Losing them was a massive blow to morale, and generally troops that were already struggling would break and flee as they saw the commander's standard fall.

[4] I'm thinking 0 modifier for 6, and then +/-1 for every 2 points. This has the added benefit of making elite troops better at fighting than their hit dice represents, and then making low-morale creatures a little weaker. A horde of 4 Morale goblins fights terribly, but six berserkers with 12 morale? You better watch yourself, even if you have more hit dice.