For some reason, I've been thinking a lot about sinkholes, to the point where I've actually been fleshing out the skeleton of a story about them.

In the story, this young man walks through his backyard and he sees this sizeable hole in his backyard where there used to be nothing more than a smallish tree and some grass. And the weird thing is that it's pitch black all the way down. He can't even see the reflection of the sunlight off of the sides of the earth, so he goes up to it, right? And it's completely pitch black. He can't see anything. He tries kicking some rocks into it, but still nothing. He goes and gets a flashlight, but it's nothing. And he's too creeped out to get closer to it, so he calls apartment management to try and get somebody to look at it, and then he goes back into his house.

It's not long until the maintenance guy gets there, but he's stumped, too, so he calls another guy to come look at it. The two of them bring a length of rope and a flashlight, but can't figure out anything and they're both creeped out by the fact that the light doesn't go anywhere. They were going to climb down but now neither of them want to, so they call management.

Management calls the police, and the police set up the crime scene DO NOT CROSS tape, and try and figure out what they're doing. They call in some geological surveying types, but they're confused as hell, too. They've got a camera with a light on it, attached to a pipe that's attached to a machine, but they're getting the same nothingness. It's like reality just stopped inside of that hole. 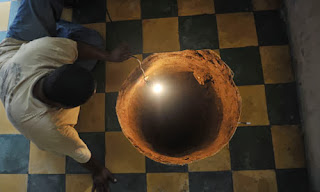 That's not the end, of course- the protagonist goes back into his house and can't sleep and things start getting weird from them on out, but I haven't decided exactly how. I'll get back to you on that one.