Glad you could join me, here's my fourth (and probably final) part of why I dislike 4th edition D&D.

You know the rules by now, so I'm going to go ahead and just get into the meat of the thing. This is the finale- I'm putting my last four reasons into one post, because I'll be honest- I am really tired of writing about this by now. It's not that I don't have the time or the inclination, I really just don't like writing about things that I don't like.

Or: Why being miserable is fun, too

Playing 4th edition feels a bit like the game was designed for children. And I'm not being mean when I say it- some of my very favorite media was designed for children. I am a huge fan of Ponyo, for example, and I know the target demographic isn't 20-somethings. But I don't care, because it's adorable and it's cute and it has a lot of really meaningful stories in it. It's life- the kid is obviously kind of lonesome, and he has a rebellious streak and he's kind of dense, and you can see that in the background, where he's not looking, adults are going on with their real lives. His mom is lonely because her husband is always away on his boat and you can see that even in a kid's movie she has very real anger at him. And Ponyo's father (I can't remember his name) is the same way- he is a good guy and a bad guy at the same time. And he has to go through some seriously difficult decisions in the movie. In a kid's movie! It's a lot deeper than it looks, and a lot sadder.

And that's what makes it good, in the end. Some things get resolved, and some don't. Some things are better, but at a very real cost. A lot of people died, although naturally the movie doesn't show it, and a lot of people suffered a lot by the time the movie ends. It's the sadness that makes the happy ending stand out as much as it does.

This is related to 4th edition D&D because the game is all "fun," all the time. There are no save-or-die effects, because it "isn't fun." There are no real penalties, because it isn't fun. Nobody likes keeping track of long-term effects, apparently, so everything gets put in a template and everything has one-round or shorter durations. You don't have a "saving throw" anymore, because who wants to fail one? Instead, it's a 50% chance that you shrug off any (save ends) effect. And there are a lot of them!

You can't die, because dying isn't fun. You can't get wounded, because that's not fun, either. And so what you're left with is a really monotone experience. You can't make a diplomatic character, because that's also not fun for some characters. Everybody's strong in combat because combat is fun, and on and on and on. The thing is, of course, that not everybody has fun in the same way, and defining fun to be "constantly getting into tactical skirmishes and winning them" is disingenuous, to say the least.

No, you are not. Moving on.

8. It's hard to create your own stuff

Or: Why "system mastery" as a plus has got to go

The tightness of the system is lauded by a lot of people as finally bringing the excesses of the horrible, horrible design of 3rd edition to reign. "Finally," people say, "I don't have to play a Wizard or be completely useless," leaving aside that there are 20+ good fantasy games where that doesn't happen. I guess in some people's minds, it's D&D or bust, and only editions from 2000 or later count.

I digress. My point is that 4th edition is a very tight system, there is no way to dispute that. Everything's hammered down and (at least ostensibly) balanced so that there is no wrong way to build a character. You can be more or less specialized, and there are more or less optimized builds for each class, too. You have all kinds of powers you can choose from that are roughly balanced, and so you never feel like you're missing out on choice.

In 4th edition, you're going to have to get writing, because a new class takes a good 20+ powers. And you're going to want to write some feats about it, too, and don't forget the fact that you have to balance it with the other classes or nobody's going to have any fun, because the game is still about combat first and foremost, and there is literally no other purpose to a class other than to provide a role in the skirmish minigame. Have fun! 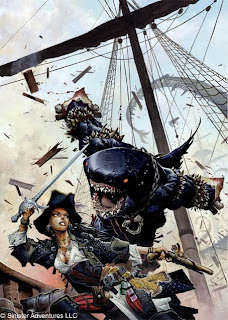 9. The artwork is hideously bad

Or: Why Wayne Reynolds is the bane of my life

There is a lot of bad 4th edition art. I'm talking, seriously, a lot. I actually kind of feel like making a separate blog for it, because I just can't stand it and there's nothing better to prod your creativity than having to see a thing that you despise, is there? I mean, when's the last time you felt like taking to your platform of choice and saying to everybody who passes by: " I absolutely love puppies and would like to talk about it!"

So here's some official 4th edition art on the right there. Look at that stupid shit! It makes me want to gauge my eyes out. There is nothing interesting about this art whatsoever. Here's a wereshark or something, POW, it's attacking and there's some splinters, luckily there's a nice pirate lass with a lot of buckles and doodads ready to turn around and attack it, maybe. I guess. I dunno. It's stupid and honestly, this is a really superficial complaint, but most of the 4th edition art is about this same level of boring workmanship. With the budget that WOTC has, you'd think they could hire somebody who could at least draw a compelling scene, but pretty much everything the dude draws looks like that. 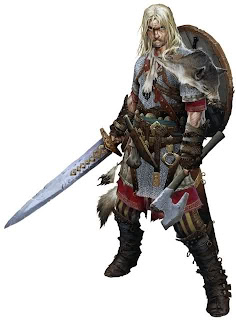 I mean, honestly, look at it. Have you ever seen anything less compelling? Ever? It's an atrocity that this man is allowed to draw anything, let alone that he is on the cover of the flagship of the single largest role-playing names in the industry. It's damn pathetic, and every time I think about it I get a little upset inside.

Here we see Generic McSwordswarrior, posing for the camera with his boots full of buckles, his hair perfectly coiffed, and absurd looking weapons. If there is a more boring pose, I'm looking for it. Everything about it screams shallow psuedo-edginess, like this has been focus-tested into oblivion and mathematically formulated to appeal to the lowest common denominators. I really, really hate the art.

But you know, I could look past this point if not for my last point.

10. I absolutely cannot get into it

Or: Why does everything feel the same?

Nothing feels magical in 4th edition D&D. And I mean nothing. Magical items are a dime a dozen and are little more than either stat sticks or trinkets. By default, everybody will be bristling with magical items.

All the characters all have a series of powers that they cast, but they almost all take the form of "deal damage, add a one-round effect" for encounter powers and at-wills, and the only really interesting ones are the daily powers, which, obviously, you can only cast once a day. There's no really neat stuff like druids shapechanging or being able to summon creatures, or anything. Everything is focused on extremely temporary effects (a single turn, in most cases, and probably not more than two or three for the most part), which means that whatever it is that you hit somebody with, they're shrugging it off after their turn is over. 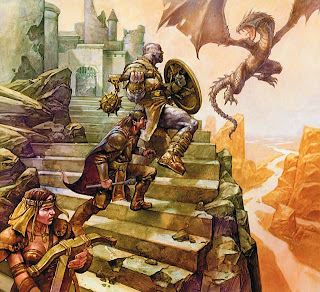 I can't get into it. I'm sorry, but I can't. What it feels like is that each player and all of the monsters are self-contained spheres; everything slides off of them without much effort, they glide effortlessly over most terrain, and they are generally untouchable. They don't feel like human beings anymore. They're the Fantasy Superheroes I was talking about in the last post, and you know, I just can't get into it. It doesn't feel like fantasy anymore. It doesn't feel like anything.

Nothing holds your players back. Nothing permanently stops your enemies, except, of course, for beating them to death over a period of a couple of turns. And that's why I can't get into it. There are no reasons to take prisoners, or to negotiate anything, or to interact with the world in
By Nick - August 06, 2013