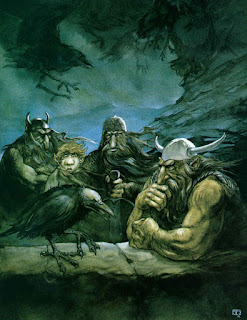 I've been conspicuously silent, but it's for a good reason- I'm putting the finishing touches on a document I like to call "Bash 'Em, Lads," based on the wonderfully simple chassis "Follow Me, Men" by Jim Wallman.

It turns out, there's really not a lot to improve upon. The basics of the ruleset remain more or less untouched- you can play the game nearly as-written if you like. Where I've made my own mark is by teasing apart the assumed math behind the scenes to get a game that's just a tad more organized. The side effect of this, of course, is that now you can tweak pretty much everything you want, as much as you want, in an almost completely modular system.

For example, instead of assuming that you have a small contingent of highly skilled, armored Knight units, you could have horse archers with little close combat value, a unit of light cavalry, and the aforementioned heavily armored Knights without feeling like you're an idiot for not just picking the Knights.

The other big thing is letting you customize your Hero. It can feel like a cop-out to just have all your Heroes have the same combat ability and equipment, so you now have some fairly simple rules for customizing your own Hero. It all feeds back into the standard equations, so by going with default values you're not gimping yourself- you're basically just using the template instead.

It's all pretty exciting. I've been working on it for hours each day for about two weeks now, so as soon as I can wrangle somebody into playing with me, I'll be able to test the rules for things like monsters, custom contingents, and expanded spell lists soon. As it stands, I've done my best to make things more or less even, but it can be hard to tell, considering the base game didn't include seige weaponry, custom Heroes, or monsters, or any sort of hint as to how one might want to make them run.

Very exciting, don't you agree? Here's to hoping the end result is something as good as the source material.
By Nick - December 25, 2012