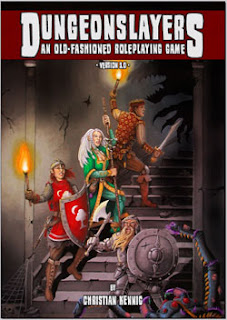 Last night I ran (and tonight I will run again) a rip-roaring session of Dungeonslayers. It's a great game, and I highly recommend it for your rules-light fantasy roleplaying needs. It's about 10 pages long, with a handful of 2-4 page supplements that flesh out the game rules in beautifully worded and laid-out text that is both concise and interesting. It's available for free from http://www.dungeonslayers.com/, as a pdf download.

When you cut out the portions of the rules that deal with Equipment and Spells (a single page each), or the introductory adventure in the back, you have a game that clocks in at perhaps five pages. I printed it out, read it over, and we started making characters.

The character creation is both differentiated and meaningful, with players choosing one of three races and of three classes, both of which are easily modifiable. The races have a tiny handful of advantages and a +1 to one of maybe three abilities each, so the difference in play is miniscule. It doesn't seem like Dwarves get enough of a benefit in my opinion, but nobody's really power-gaming a system like this to get the Elven +1 to nimble things racial trait, whatever it's called. If you want to be a Dwarf, then be a Dwarf. Furthermore, Dwarves can't use two-handed weapons or longbows which upset one of my players, who chose to be a Dwarf Spellcaster. No quarterstaffs? What, they only come in one size? We decided that he had a Dwarven Quarterstaff, kept exactly the same stats, and went on our ways.

Classes are similarly easy to understand. You're a Fighter, Scout, or Spellcaster, and you get another +1 in a related ability. Your class affects what talents you have access to and when, and what abilities are easiest for you to level up. Your Talents are little perks that you gain access to as you level, like having a Familiar or getting a bonus to damage. All the Talents are flavorful and interesting, with only a couple of relatively lame ones that could be easily modified (What do you mean Familiars can't be scouts?) to suit your own personal preferences and desires. That's the point of the game, right?

Characer abilities are seperated into Attributes (which are Body, Mind, and Agility), and Abilities (which fall under the headings of one of the attributes, two each.) Your scores for things like Hit Points are Body + Toughness + 10. It's quick and easy to set up your character's abilities. The system is roll-under 1d20, say, Body + Strength to succeed at knocking down a door. A single die roll does just about everything.

Combat is quick and painless, with a lot of missing on either side, at least for starter-level characters. I ran a combat last night where the goblins all missed, every time they attacked but it didn't really matter. Each goblin got a single roll, each player got a single roll, and that was that. Goblins aren't exactly known for their toughness or durability and, truly enough, they were all dispatched with a single successful attack. The really interesting thing is the way damage and attack are rolled on the same die- you want to get as high a roll as possible, but still under your ability so there's always a feeling of "Oh, I just missed em!" which is exactly like real fighting. When you go for the haymaker, you'll either knock 'em flat or whiff hard, and that's what it feels like. It's breezy, exciting, and visceral.

And I think that's Dungeonslayers' greatest strength: Things move extremely quickly, but satisfyingly. Everything is one die, rolled underneath your Attribute + Ability, with all the trappings of D&D but with the complexity of every edition filed off. This game moves extra, extra quickly, and that's great if you're the kind of spontaneous, seat-of-your-pants kind of guy that likes a light system that breezes through everything. It's all just one roll, the same roll, all the time. By the end of the night, my players were guessing what rolls they had to make to do things, and then making them before I even said anything, and that's yet another strong suit.

The other thing I really like is how much easy to digest crunch is in the game. Some rules-light systems feel to generic, like there's nothing weighing it down- the stats aren't interesting, or the rules don't click together in that nice way. Dungeonslayers knows who it's targeted at, and it shows. Spells feel Vancian without being Vancian, fighting is quick and dirty with lots of room to improvise (want to make a flying jump off that bandolier? Sure, roll your Body + Reflexes + Attack Value instead of a regular attack and we'll see what happens). In short, it's a truly excellent game that I wish there was more of. The expansions, also free, add a couple of interesting wrinkles, and the only bad thing I can say is that there really isn't enough of this tightly-designed, truly exceptional game. And did I mention it's free? Download it today. You won't regret it.
By Nick - March 12, 2011