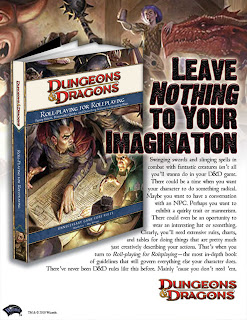 So 5th edition D&D is coming out apparently soon, because if there's one thing that Wizards of the Coast has found out, it's that inventing a miniatures wargame with the D&D brandname is a fucking fantastic way to get people to blow a hundred bucks on buying the rules to Warhammer Fantasy Lite, so why not make a new and totally incompatible version every couple of years?

The more I'm watching this unfold, the more I realize what level of marketing genius they truly have over at Wizards. "Forcing" players to upgrade or be left behind every couple of years, they can probably rely on peoples' enthusiasm for endless sets of rules and miniatures combat to get people to upgrade over and over and over again before they catch on.

I mean, it's been what Games Workshop has been basing their entire business on for over a decade now, the constant cycling of rules and miniatures. Frequent overhauls and revamps are their lifeblood. After all, if GW sells you a new core rulebook and your chosen race's codex and then $200 worth of miniatures, they'd be insane not to want to sell you all of that again by changing the rules, the codexes, and making your old minis obsolete.

I need to get in on that or something.


But enough criticism. I think that 5th edition could be Wizards' chance to make things right again, as evinced by the fact that apparently letting Mike Mearls back on board. I don't give a damn what anybody said, he obviously understands what this game is best as- he designed Iron Heroes for fuck's sake. And then Monte Cook, designer of the bizarre and brilliant Ptolus campaign setting and some of the coolest and most creative tweaks I'd seen given to the (rather kind of crappy) 3.x edition system.

Yeah, I'm optimistic. Maybe we'll get away from the "combat is the only real important part" of 4e and back into a system that's not just congealed combat rules.
By Nick - January 09, 2012